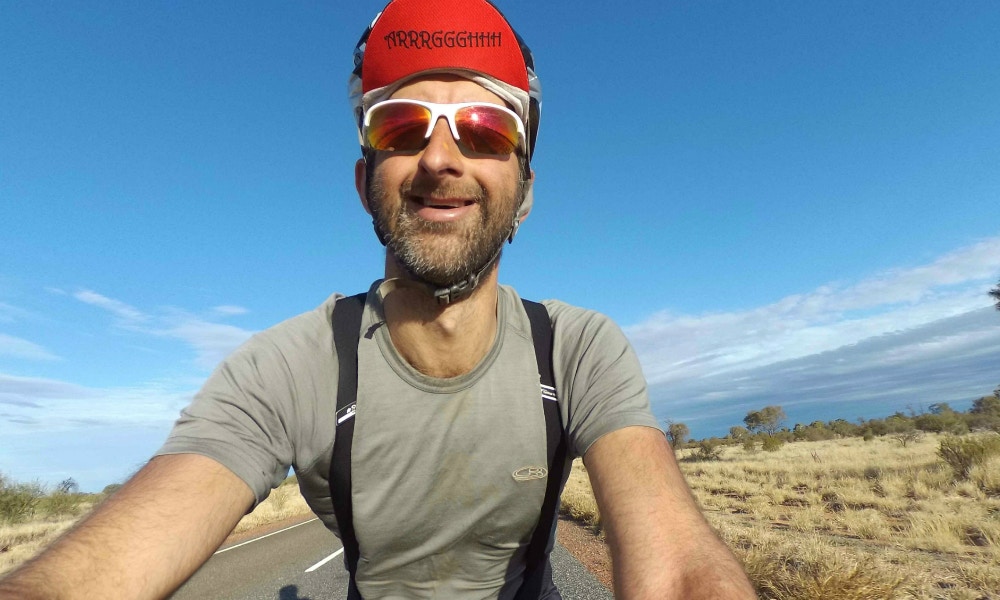 “Initially I had my dog with me. But after two-and-a-half days’ riding it soon became evident that we weren’t both going to be able to get to Broome that way… Turns out a mate I’d not seen for eight years saw me cycling down the highway. He pulled over to say g’day and offered to take the dog back to Belgrave. Unbelievable… What are the chances?!”

Tim Spiteri is not a man who does things by halves. We discovered that when we heard about his ocean rowing record attempt from West Australia to South Africa.

When we last caught up with Tim, he was contemplating taking a fat bike from Melbourne to Broome and back again. With his dog. That’s something like 8,000km, give or take a few. A couple of months later and he called us to say that the following weekend, he was off. He’d taken leave from his job at Victoria Police, spec’d his bike to handle the distance and duress of such a feat, and was gunning to go.

15 days later and we heard that Tim had already made it to Alice Springs. Having to give up his canine companion was only part of the bundle of surprises to come his way. With his partner now having joined him for the return journey, we caught up with Tim to find out what’s come his way on this, his latest meteoric adventure.

See also: Bob Cooper is an expert on Outback Survival...

Tough. I have absolutely seen the most I ever want to see of Tanami Road. I knew that was always going to be full-on; it’s notorious. I’d planned to go up to wider tyres for that portion of the trip and had sent myself a package of these as well as more food. Unfortunately the package hadn’t arrived in Alice by the time I had. I hung around for six days, really not keen to depart without it. But in the end I called the shot to leave, and off I went.

I was able to average about 100km a day despite the corrugation of the road, but that relentless impact meant plenty of falls and plenty of mechanicals. My tubeless back bracket broke, two spokes broke (by that point in the ride though I was so fatigued I didn’t even notice) and latches on all the panniers broke, making it really difficult to keep carrying everything.

It doesn’t sound good… What was the biggest challenge you faced getting to Broome?

My water supply, or lack thereof, became a genuine concern for me whilst I was out there. At one point I was supposed to be carrying 22-litres of water to take into account the gap between water stations out there on the road. But the breakages resulted in water loss. It got to one point on the journey where the sand was so thick and so deep that I could only walk my bike… And I was averaging 1.5km an hour. It was really tough going. I got into a township and locals said I faced another 20-30km of that terrain. So I made the decision; I would get assistance to my next stop. Lucky for me a truckie was happy to oblige and so the bike and me got a lift.

Your partner is now doing the return journey. What training has she been doing?

Before she came away with me on this trip, Jo had probably not ridden more than 20km on a commuting bike. Yesterday she rode 170km. [Tim calls out to Jo at this point] Jo – they’re asking how you’re doing…? She said she’s going fine!

What’s been a positive stand-out for you on this latest epic adventure?

Australia is seriously an amazing country. Even in the middle of the dessert the landscape changes all of the time. And the people have been amazing – locals and travellers along the way have offered so much. It’s been lovely and pretty humbling to experience.

Are you the only crazy person out there doing this, or have you encountered others along the way?

I’m not the only one! I’ve met a fellow from the UK who was riding from his home through to Asia and now here. He should be somewhere in Adelaide by now. A Norwegian I met is riding up the West Coast right now – he’s been gone for two years just cycling his way around the world. There are so many amazing people doing so many amazing things out there – it is sensational!

What would be your one piece of advice for anyone considering their own version of such an adventure?

Just go and do it.

What was your greatest adventure? Tell us on Facebook or in the comments section below!