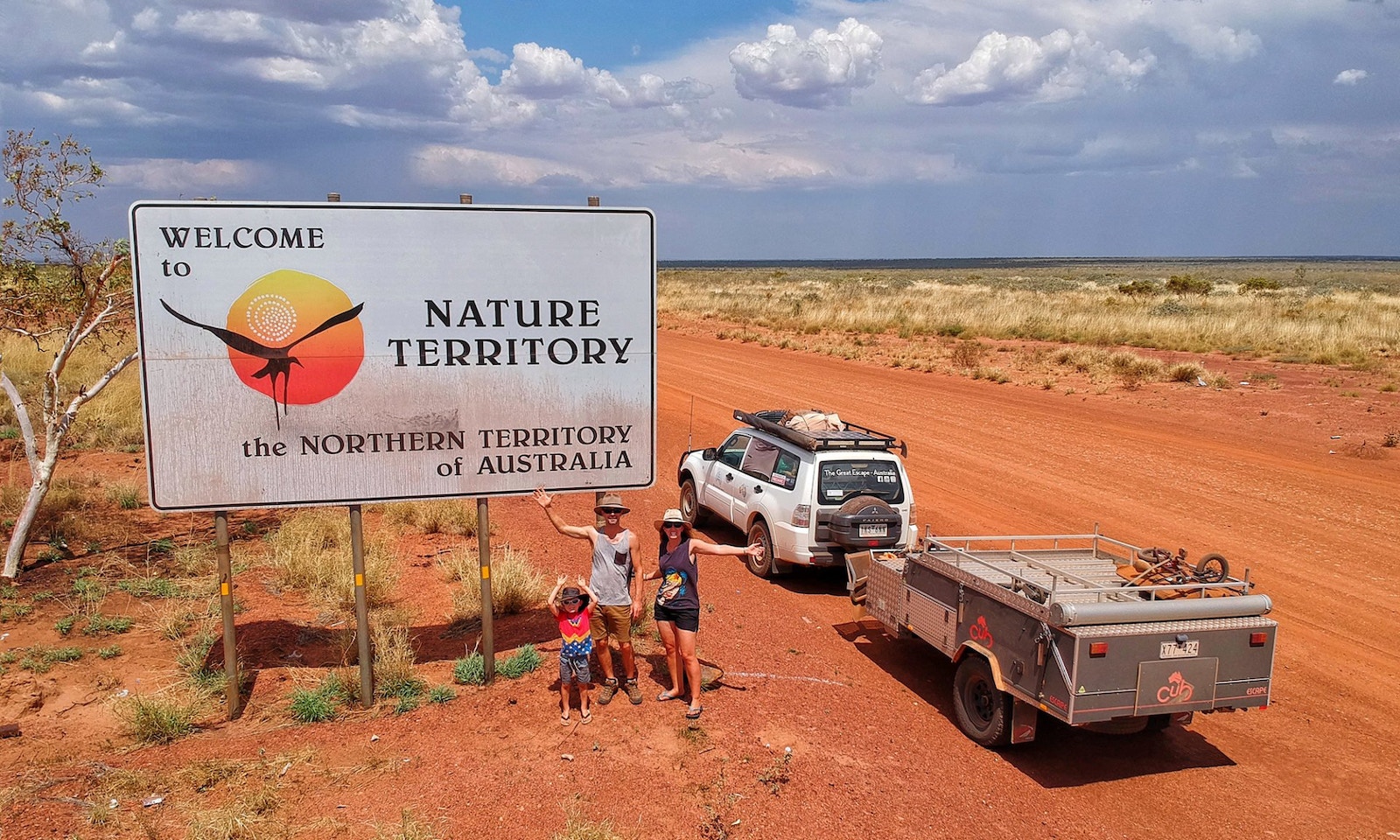 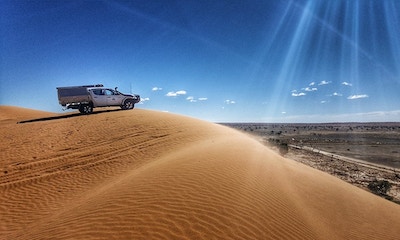 Most people think that to get to Alice Springs and the surrounding sights of Central Australia you need to drive up (or down) the Stuart Highway. And it’s true - if you have a 2wd then the Stuart probably is your best bet. But if you’re set up for off-road travel, and you fancy a bit of adventure, then there are some other great roads you can utilise to access the Red Centre.

The last time we came to Alice Springs we journeyed up the Great Central Highway, and really enjoyed it. So this time when we needed to get from Broome to Alice Springs, the Tanami Track was our first choice. Not only is it essentially a shortcut from the Kimberley to the Red Centre, but we always prefer to take the road less travelled, and the Tanami definitely ticks that box!

The Tanami Track runs from Halls Creek to Alice Springs over approximately 1000km, of which about 800kms is dirt (the last section from just past Yuendumu is now sealed road). We took three nights on the track, but you could realistically do it in two if you’re pushed for time. And some people choose to take their time and do it over a week – something we probably would have done ourselves if we’d been travelling at a cooler time of the year.

The track runs off from Highway One just west of Halls Creek, in the Kimberley. A town that comes with a little bit of a reputation (as some towns do) but as in most cases we found it to be underserved. We spent the night here before we hit the track, and while the caravan park is certainly overpriced, it was clean and friendly, and the pool was a welcome sight. Halls Creek will also be your last chance to stock up on food, fuel and water before hitting the red dirt, so make sure you get everything topped up here if you haven’t already.

From Halls Creek most people on the Tanami make the journey out to Wolfe Creek, if only to say they’ve been, and didn’t get murdered by Mick Taylor. Unlike the movie you’ll be unlikely to find any homicidal maniacs, but instead Wolfe Creek is home to a pretty awesome meteorite crater. This crater is 880 metres across, and was formed when a meteorite crashed to Earth approximately 300,000 years ago.

We’d never seen such a perfectly formed meteorite crater before, so it was well worth the journey to check it out. We’d read that the road was ‘the worst in Australia’ but we didn’t find it to be any worse than the Tanami itself – yes it was corrugated in places, but we didn’t find it too extreme. You can camp at Wolfe Creek, and in fact it’s one of only a few official campsites on the Tanami – there’s plenty of space, some nice new drop toilets (BYO paper), and it’s free of charge. However there isn’t any shade, and once you’ve seen the crater there isn’t much else to explore.

Fuel stations are few and far between on the Tanami, with a stretch of at least 600km between fills, so make sure you know your car and your fuel economy, and carry enough spare fuel in jerry cans if required. Remember that on dirt, with tyres deflated, and driving in high range 4x4 you’ll likely use a little more fuel than usual, particularly if you’re towing.

If you plan to fill up at Bililuna (best avoided if you can as it’s the most expensive spot!) then be aware they have a leisurely three-hour lunch break, so make sure you arrive during opening hours of 8-11 & 2-4 or you may have a long wait for fuel.

So after popping into Halls Creek you’ll probably want to stop at either Bililuna or Balgo to top up on fuel while you can. Both towns are small but welcoming indigenous communities. Bililuna is a shorter detour off the track, but Balgo has the cheaper fuel and is on a 24-hour self-serve system so you can call in any time. Right by the fuel pump at Balgo is a well-stocked grocery shop, and just up the road is the excellent Warlayirti Arts Centre.

This is one of the better arts centres we’ve visited in our time and is well worth the 33km detour off the track. The gallery alone displays some beautiful art, but there are also plenty of works available for purchase, a very friendly manager who is happy to have a chat, and you can spend some time meeting the artists and watching them at work. Balgo and Bililuna can also be accessed from the northern end of the Canning Stock Route.

Once you leave Balgo it’s an approximately 600km drive until you reach the next town, so prepare to get used to your own company. We found the road variable – quite good in places, heavily corrugated in others. But we were able to travel at 80km/hr most of the way, with rare times going down to 60km/hr, so the road wasn’t too bad. We hit a bit of rain along this section of track, and then again towards the end, which made things a lot more sticky and slippery, but fortunately not enough rain that we needed to stop. About 100km east of Balgo you’ll also hit the WA/NT border, meaning clocks will change by an hour and a half.

We much preferred the NT time zone as it meant the sun was no longer coming up 4am! From here your next fuel stop is at Yuendumu, where there is also an arts centre (that was unfortunately closed when we came through), and two small shops. It’s just after Yuendumu that the road goes from red dirt and corrugations to smooth black top, and you can breathe a little sigh of relief. The next fuel stop is at Tilmouth Well Roadhouse, which is also home to the only other designated camping area on the track ($30/night, power & water included. Plus free WiFi!).

However, just because there are very few designated camping areas doesn’t mean there is hardly anywhere to camp. In fact, you can more or less camp anywhere you like, and there are some real gems to be found along the way.

There is, however, no camping at any of the indigenous communities, and while no permit is needed to visit them for supplies, you will need to seek out a permit if you plan to stay overnight. All three of the communities along the track have mobile reception (Optus at Bililuna, Telstra at Balgo and Yuendumu) – and don’t be put off by first appearances. Yes, there is a bit of rubbish around, yes there are rusted out old cars. But you’ll generally find them to be welcoming and friendly, particularly if you are visiting the arts centres and are being polite and friendly yourself!

Once you leave Tilmouth Wells it should be smooth sailing all the way to Alice Springs on the tarmac. It does become a single lane in some parts, so look out for road trains and give them plenty of space.

We really enjoyed this journey – it was a really great taste of outback touring, without being too hard-core. Yes, we needed to take a good supply of food, fuel and water. Yes, we had a well-stocked first aid kit, plenty of recovery gear, and travelled with a satellite phone. But we passed plenty of locals, truckies, and road workers (and even the odd traveller) so we were never alone for too long. And we spotted plenty of locals traversing the road in their ford falcons as well!

We spotted lots of dingos, including a (seemingly friendly) young one that was resident at one of our overnight stops, plenty of birds of prey, including some HUGE wedge-tailed eagles (watch out for them on the road – they like to have a standoff and refuse to move until the last minute), and a few roos. Unfortunately, we didn’t see any camels on this journey, but I’m sure they’re out there.

We had blistering high temperatures, as well as literal walls of rain (that dropped the temp from 37 to 21 in the blink of an eye!). And we didn’t run into Mick Taylor. If you’re looking for an adventurous way to get yourself to Alice Springs, then we can definitely recommend the Tanami as an excellent way to do it!

So what the hell is GoSeeAustralia? We’re basically a bunch of Aussies who love the outdoors – and that’s why we’ve created a place where you can book campsites at over 500 caravan parks and campgrounds Australia-wide, rent campervans and RVs, as well as share your experiences and stories.

Check out our parks in Australia, browse stories from our community of travelling contributors, and start planning your next epic Australian road trip or camping adventure. And remember, download the CamperMate app before you go, to find everything you need when you’re on the road.