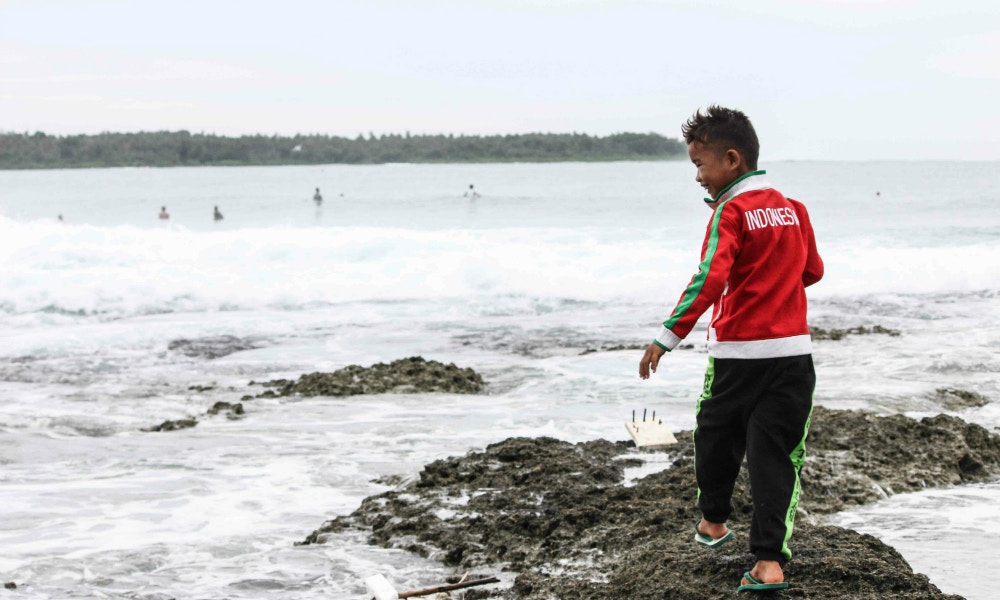 This isn’t a story about surfing.

It isn’t a story about nature.

It isn’t a story about tourists and the fine lines we walk in either helping – or hindering – the destinations to which we venture.

It isn’t even a story about twin brothers who grew up loving the surf, but thinking there was still something more to life.

It’s all of this and more bundled up together, and it’s called The Fresh Air Project.

Ben and Rory Gollow are West Australian twins born (Rory one minute ahead of Ben) and bred on a diet of long, salty summers and weekends out chasing waves. From Perth to Dunsborough the two would drift, growing up on the kind of sand and sea diet plenty of us just romanticise about. But as seducing a lifestyle as it was, the brothers nonetheless realised they’d have to buckle down at some point and start achieving more than catching the perfect ride.

They studied Business and Sustainability at university in Perth, which led Rory to a position within Ernst & Young’s Sustainability division, and Ben with Social Ventures Australia, a consultancy for Non-Government Organisations. All the while however, they never stopped surfing and they never stopped travelling further and further afield to discover new waves in exotic new locations.

That’s the thing about surfers… In their quest for the ultimate experience, they often become great adventurers on land as well as on water, heading to some of the most remote and rugged wildernesses on the planet. It was through those adventures that the brothers began to realise the impact travellers could have on a destination. Everyone goes looking for their slice of paradise, but when they arrive are they supporting the local community, or a foreign bank account that controls the majority of it? What legacy do they leave for the locals once bags are packed and boarding passes issued?

And this is where The Fresh Air Project comes into play.

The Gollows realised that as travelling surfers with a love of nature and respect for locals, there was a role they could play in helping to sustain local environments and their communities. They could begin to bring like-minded adventurers to these exotic locations, and immerse them in the authentic culture. They could facilitate an exchange whereby the locals directly benefitted from the visitors’ economic impact, and the visitors began to learn and appreciate the local culture and how the people really lived. At least that was the original thought – but it kind of exploded into something way, way bigger.

See also: Clean Coast Collective are cleaning up a coast near you...

“As surfers we go to some incredible locations, but we also see first-hand the impact travellers and tourism can have on a destination. We’ve been to areas that were once pristine, other-worldly places of unimaginable beauty, and now they’re just sinking in their own putridness. It doesn’t have to be like that,” says Ben.

The Fresh Air Project take their adventurers to places like Indonesia and Sri Lanka (soon India, hopefully) and they stay in locally owned venues, and eat at locally owned establishments. In time locals have learned that these Fresh Air Project people truly mean well, and so they’re invited into homes where they begin to connect on a far deeper level, and learn so much more about one another’s culture. In places like the Sri Lankan East Coast, which is predominantly Muslim, The Fresh Air Project organise for female guests to be appropriately clothed whilst out on the waves. It’s a supposed small gesture which carries so much weight among locals.

The Fresh Air Project guides make themselves available to local children for free surf lessons, and whole groups conduct informal English lessons for the kids. Most recently, a female-only tour was organised to Sri Lanka. Female instructors took classes and then welcomed local women into the group, many of whom had never even swum let alone attempted to surf. It was an incredible success for all involved.

But like me, you don’t necessarily have to be a surfer to get involved; you can come on board as a total newbie. The Fresh Air Project limits their trips to eight people maximum in Indonesia, and ten in Sri Lanka. The team requests anyone interested to firstly apply by filling out a fairly personal form explaining why they want to travel and what they want to get out of the experience. The responses help the team to essentially curate what they feel are the best groups; these people are probably more likely to get on well with these people, and those people with those.

“Really, adventurers who travel with us are all like-minded, anyway, but we do our best to tailor to the individual so that everyone has a really special experience,” says Ben.

See also: How to have an amazing surfing adventure in Bali

It’s just the very beginning of the level of detail, thought and care that goes into each of these trips.

We wind up our chat and I find out Ben is heading off on annual leave tomorrow.

“Not to begin with,” he replies. “I’m off to a World Economic Forum in Europe.” I’ve known him for all of ten minutes but am not the least bit surprised.

“Then I’m coming home via Gnaraloo. It’s got to be one of the most untouched, stunningly barren and beautiful places on the planet. You’ve got to four-wheel drive in, it’s totally remote, and I’m just going to surf the whole time,” he said, sounding pretty darn charmed by life, as he well deserves to be.