Teaching Kids to Love the Environment 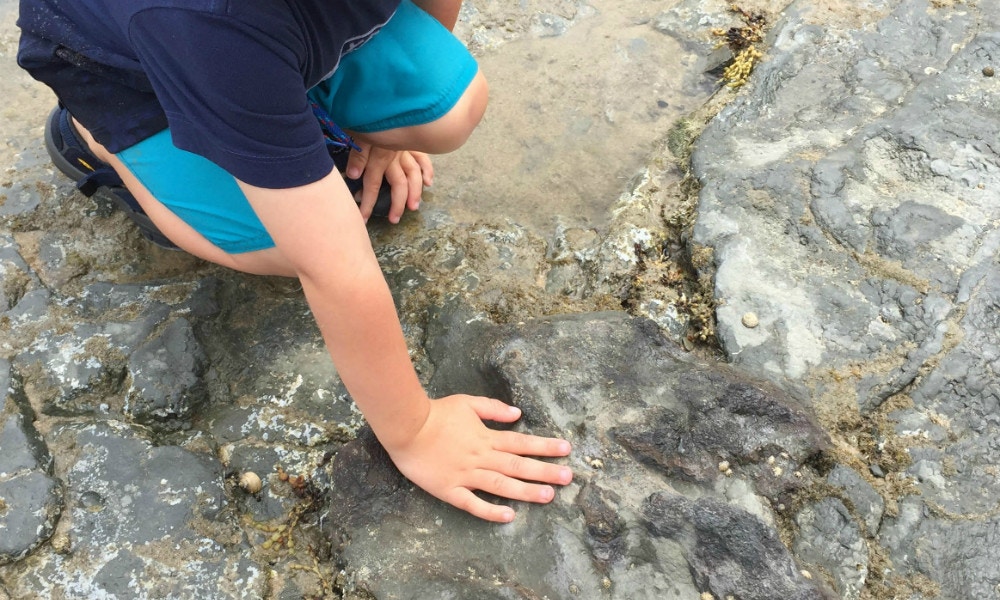 In my last blog post I touched on the environment and how to help protect it, while still enjoying the great outdoors with the family. In this article, I am going to give you some amazing ideas for getting the kids out into that environment, showing them the reasons why we look after what we see.

Go on a dinosaur dig

Over the summer holidays, I was fortunate to visit Inverloch, on Victoria’s Gippsland coast, around 1.5 hour’s drive from Melbourne. I went with a good friend of mine, and our collective five children under 6 years of age.

After the obligatory fish and chips for lunch at the local park, it was time to join the dinosaur dig, hosted by the Bunurong Environment Centre, and my old school teacher Mike Cleeland. He was always into dinosaurs, and taught me the beauty of finding rare fossils (he now has a dinosaur named after him!).

And now it was his turn (and mine) to share that love with the next generation.

The importance of our planet's past

We plodded down to the beach for an hour of fossil finding, where the kids were openly encouraged to pick up rocks, hit them with hammers (supplied), and see what they could find. My 4 year-old son just loves dinosaurs, and was in awe of the giant dinosaur footprint fossilized on the rocky shore for all to see and touch. Unfortunately, there were no more dinosaur fossils to find, but there were caves to explore and rockpools to cool down in.

This was also the perfect time to explain why we need to look after this area.

I asked the kids, “What would happen if everyone left their rubbish on the beach?

Would the fish get sick?

Was there rubbish hanging around in dinosaur times?

What would the cave look like if it was piled full of rubbish; would you want to go in there?

The answer from little-miss-2-year-old was, “It smells yuck now!”

I guess rotten seaweed does smell a bit funky. But the lesson was beginning to sink in.

Kids have amazing empathy for anything furry and cute, and this feeling can be used to get our point across when trying to explain the importance of looking after the environment to children. Try taking them to a petting zoo, where they can touch and get up close to the different animals that we have in our environment (not just on farms), thereby giving you an amazing opportunity to discuss creatures and ecosystems closer to home on the way home in the car.

Over the past weekend, our family spent three days camping with friends near the Tarra-Bulga National Park, in Victoria. We went bushwalking to see amazing waterfalls, wandered through ancient rainforests, and cooled off in pristine streams. With three young children between us, the going was a bit difficult at times, but they just loved exploring the environment around them.

Slow down to a child's pace

Going at their pace, rather than hurrying them along, meant that we had time to really investigate the little things with them.

My daughter was enthralled by the tree roots sticking up from the ground, where we looked for fairies’ houses. She even “made” some furniture for them, from sticks on the ground.

My son was stomping like a dinosaur and pretending that the waterfalls were watering holes for T-Rexes, and the other little boy was trying to see what was in the upturned logs.

Their imaginations were vivid, reminding me of a younger version of myself. I was caught up in their wonderful stories, and although it was only 3km long, the trip was one of the most fulfilling I have done in recent times.

One afternoon, it was quite warm, so I took the children to the river nearby for a swim. We walked over rocks, looked for platypus. We found none, but that may have been due to the noisy nature of three kids! However, we did find a “spa” bath – a hole in a rock, where there was a small waterfall making bubbles for us to sit under.

We enjoyed that area for hours, only coming out because it was getting dark and the kids were cold.

On the way back to the caravan, my son found some rubbish. Without a word, he picked it up and carried it to the nearest rubbish bin. Something is sinking in, and I’m so very proud.

There are so many wonderful places in Australia (and around the world) for kids to see and explore. Many of them are in our backyards, such as botanical gardens (which often have junior ranger programmes that kids can joins during school holidays) and local parks. Even the playground near your house can have a smorgasbord of environmental treats for your children to see (once you pry them away from the swings that is!). Coastcare and Landcare are always after volunteers, and will happily take families on most outings.

Nothing beats just being with your kids in the outdoors. And really, teaching them to respect the environment makes good sense, as it is them who we will be leaving the world to in the future.

Find out more: about Beechy Honey