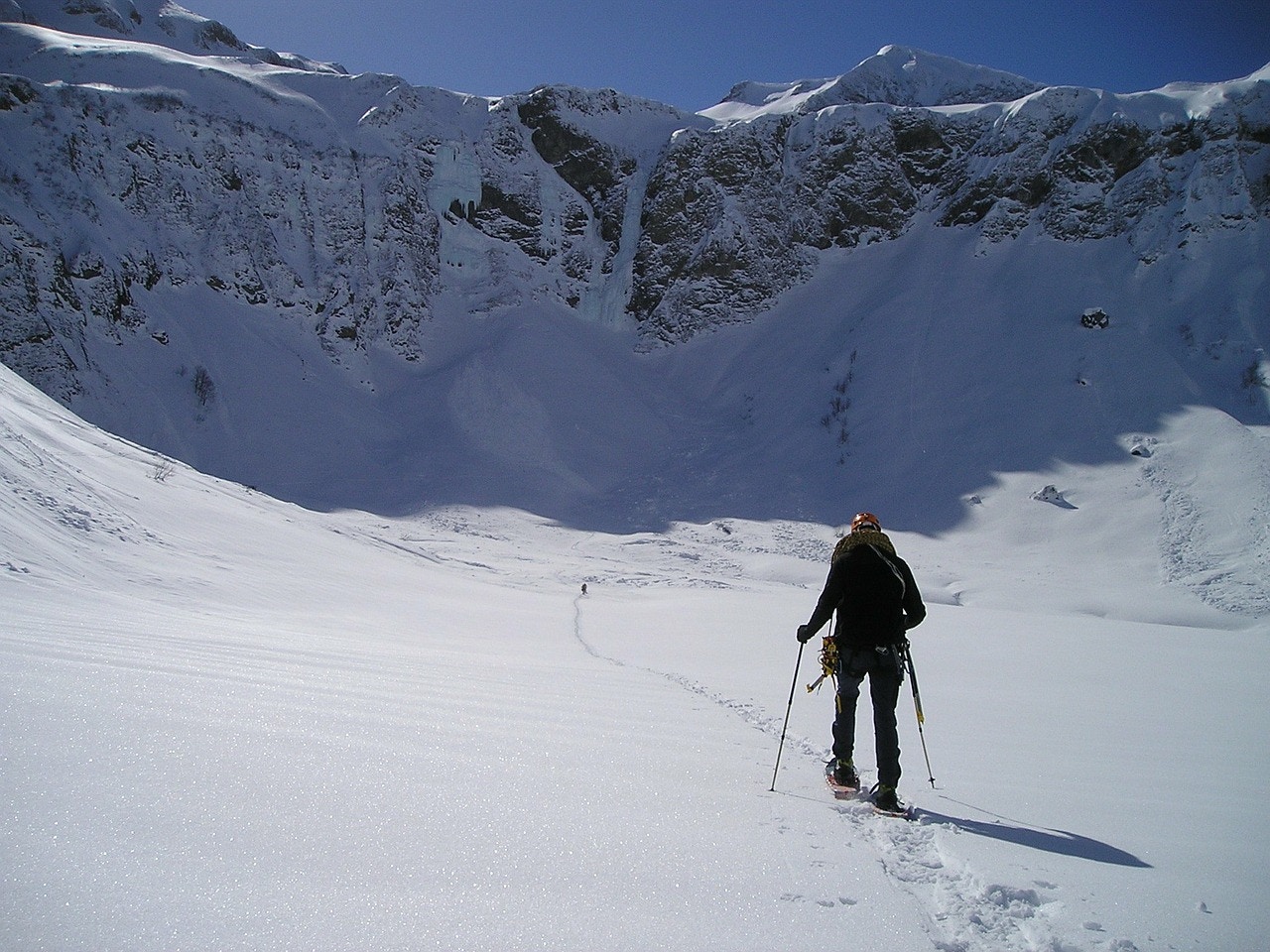 Designed specifically with snowy and icy conditions in mind, snow boots are typically water proof and feature high cuffs that stop snow from entering the boot. Snow boots can be used in a range of weather conditions, but – because they are usually very warm – are best suited to colder climates and environments rather than warm ones.

Hiking in winter? Check out this handy gear list first!

Snow boots are not designed to be used in conjunction with skis or snowboards. They are suited for everything in between: driving a snowmobile, shovelling snow, some forms of mountaineering, or just building a snowman or riding your toboggan. Snow boots keep your feet warm and dry and are much easier to walk in than ski or snowboard boots.

Snow boots can be used effectively in conjunction with snow shoes as they can be strapped in and secured, allowing you to walk in very deep snow if the terrain dictates.

Snow shoes are not like any kind of shoe you would typically use on dry land for day to day foot protection. Snow shoes are devices that are attached to your hiking boots or running shoes in order to allow you to walk in deep snow without the snow collapsing under each step causing you to sink.

Going off-piste? You might need a pair of snowshoes to get you there…

Where can I use my new snowshoes?

There has been a major resurgence in the popularity of snowshoeing over the last few years. The advances in snowshoe design have led to a wider range of activities that can be performed in the winter months. Many ski resorts are now building snowshoeing trails that offer people an opportunity to get out into the back country and experience the mountain at a slower pace.

Lightweight snowshoes are popular among runners and there are even alpine running events that encourage people to get out and perform their favourite summer sports in winter. However, snowshoeing on marked ski trails is not always permitted as it can be dangerous to have people walking in high traffic ski areas where skiers and boarders are travelling at much greater speeds.

You will find you can travel a lot further and find the going less tough if you use a pair of hiking poles or ski poles while snowshoeing. Poles help you to keep your balance and can be used to lever yourself back up if you start to fall. Planting poles with each step helps take some of the strain and weight off your back and legs transferring it to your upper body preserving your energy for longer.

The first snow shoes date back at least 4000 years ago, the first may have been implemented as far back as 4000BC. Researchers believe that the early pioneers of the technology may have used nature as an example, as scientists often do when coming up with a solution to a problem. Some species of Arctic Hare have adapted over time and developed abnormally large feet which allowed them to walk along the surface of the snow without sinking.

The basic principle of snowshoeing follows that of such animals. Snow shoes create a wide surface area to allow the wearer to walk on deep snow without sinking in. This principle of ‘flotation’ was especially useful for early indigenous American tribes who would rely on travelling in deep powder to hunt and to travel when conditions became too harsh in their location.

Snow shoes were originally constructed from wood, and some snowshoers still prefer wood shoes to this day. Wood is very quiet, making them an ideal choice for hunting and doesn’t freeze as quickly as composite materials or metals.

There are many different designs of snow shoes on the market today, but they mostly follow the same design principles: a semi-rectangular or round frame work that is interlaced with webbing, creating a wide surface area to distribute the wearer’s weight evenly across the snow. Today, snow shoes are more commonly constructed from lightweight materials such as aluminium. Strong lightweight materials such as neoprene and nylon are preferable to animal hide lace that was originally used as they don’t require maintenance and offer much more effective waterproofing.

Bindings for snowshoes have gone through a number of changes over the years, and while the traditional strap binding is still in use today, modern bindings allow snowshoes to function more effectively over a greater range of terrain for a wider range of activities. Modern snow show bindings are similar to cross country ski bindings, allowing the wearer to lift their heel as they walk or climb offering greater extension with each stride and reducing the weight they carry with every step, thus preserving energy. There are two main kinds of snowshoe binding used today: ‘fixed rotation’ bindings, and ‘free rotation’ bindings.

Fixed rotation bindings fasten both your heel and your toe to the snow shoe itself meaning the snow shoe travels with you. These are great for more agile types of snow shoeing and allow for better manoeuvrability sideways and walking backwards. Free rotation bindings benefit the wearer, allowing for a more natural gait and provide better traction when ascending steep slopes. Some free rotation bindings allow the user's crampons to dig into the surface of the snow at the toe, making climbing even more efficient. Because they are only fixed at the toe, the back of the shoe sometimes trails on the ground while your boot lifts off the baseplate, meaning it can be difficult to back up or walk sideways.