From Stradbroke Island to the Simpson Desert 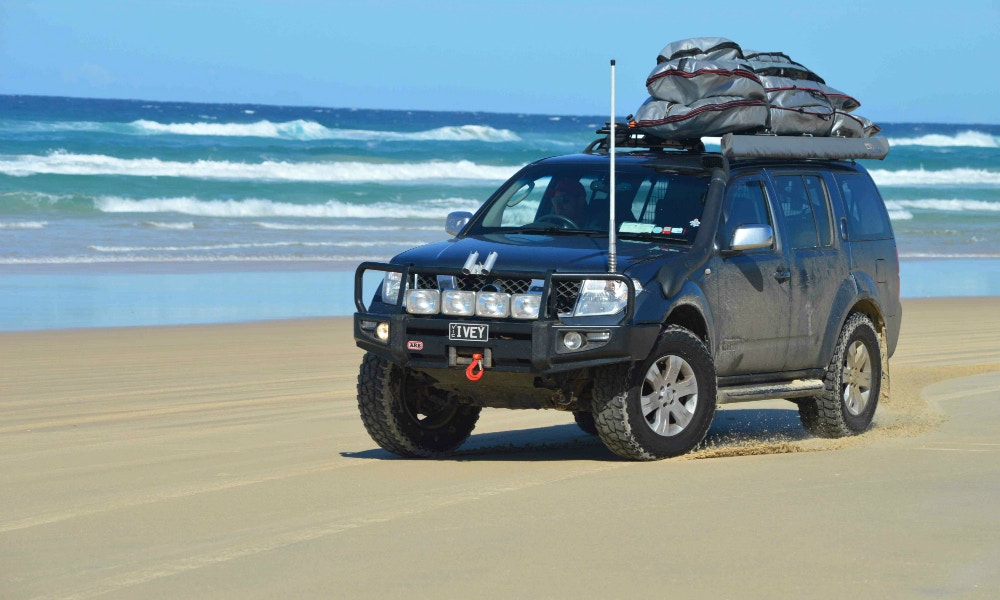 We shut the door to the café behind us trapping the wind outside and headed over to the counter to order food, rubbing our hands together encouraging the blood to return to our fingertips.

So how long until you head to Fraser? I asked Scott.

It wasn’t a question.

Scott Ivey wasn’t excited to return to Fraser only because of the current state of Melbourne’s weather. Born in Williamstown, Scott has spent a great deal of his time over the years exploring the Eastern coastline right down the length of Queensland. He was born in Melbourne, but you might say that the Coast is his spiritual home.

Scott was three or four years old when he first visited North Stradbroke Island with his Dad. The Island is home to native Australian wildlife, and – like its next door neighbours Fraser and Moreton – is one of the few locations you can still camp on the beach with a 4WD.

Scott remembers camping right there on the beach with Dad watching the sky get dark and the stars get brighter, and he knew that he would always come back to the island one day.

In 1997, Scott organised a surf trip with some of his mates. Scott was in his twenties now, and his idea of a good camping trip had changed.

“There were three things a trip needed back then: Beer. Mates. Surf.” He counted them out on his fingers. “We didn’t camp if there wasn’t any good surf to be had.”

So the idea behind the trip was simple, they only needed three things to be happy, plus food and water – well, the water might have come in the form of beer… And they would start in Noosa and work their way down the East Coast, stopping only to surf and to sleep. But they had to sleep where there was surf.

Needless to say, Scott had a hard time convincing the boys that they should take a detour to North Stradbroke Island, especially when it was about $8.50 for the return ferry trip (which was probably about six beers in those days) and especially when they had already forked out for nine flat tyres over the three week trip.

Scott explained to them that they were set up perfectly for the trip. They had a 1979 Land Rover Troop Carrier with a king-size bed in the back, and 9 surf boards on the roof. They played cassettes of [insert band name here] though their home stereo system and watched ‘Crocodile Dundee 2’ on a little black & white TV that Scott reckons was only about 2.5 inches across. I couldn’t help my mind from wandering for a second, imagining Crocodile Dundee climbing out of the bushes staring at the boys intently. “That’s not a TV,” he says. “This…is a TV!” pulling a 50inch flat-screen out of nowhere.

While we might laugh from our seats of technological superiority at the idea of a bunch of twenty year olds huddled around a 2.5inch screen for Saturday Night at the Movies, back in ’97, this was a sweet setup.

Even though the boys weren’t completely convinced by Scott’s speech, they agreed to pick up a permit and catch a ride on the ferry to Straddie.

Scott stops for a moment, smiles with that familiar ‘I told you so’ expression.

“Once they saw the beach and the waves, they quickly changed their tune,” he said, still smiling.

Scott and the boys still go back to Straddie.

I asked Scott, “Compared to the way you went camping back then, how have things changed?”

“Well I supposes the main difference is preparation. That trip back in ’97 was simple. We didn’t really plan a whole lot. When we go camping now, we leave prepared for anything.”

It’s a term familiar to more and more people right now headlining newspapers and talked about in cafes with white tiled walls and incandescent bulbs hanging from broken bicycles that have been there so long they’ve grown moustaches to match the proprietor’s.

Jerome Borazio (the same Jerome that lends his name to Melbourne’s iconic Laneway Festival) has recently partnered up with Melbourne Central to create the first ever Rooftop Glamping Hotel.

I needed to get to the bottom of things. What is Glamping, and is that what Scott does?

“There is a lot of confusion around the term. Our style of camping shares a lot in common with Glamping: we take everything we need with us. We don’t sleep on the ground, or dig a hole for a loo anymore. The term Glamping is really a marketing tool, it appeals to a wider audience. But Glamping is different really – sites are set up permanently; tents are not easily packed down and moved to a new destination. We’re much more mobile than that.”

If Scott from ’97 could see Scott from 2015 at his campsite, he might think it was all pretty glamourous, but in reality, Scott has simply accumulated enough gear to make the experience as streamlined and efficient as possible. And if taking a generator and a portable loo with you makes your trip more enjoyable, then who cares if you are not as hard-core as the guy who takes only a Swag and a Billy to get by.

“How my folks travel is different to how we travel – with camping you can experience the same destination at the same time as a group in different ways.”

It’s not all about the surf and the beers anymore either. Scott has widened his scope, to focus on the bigger picture partly due to the fact that it’s not just him and the boys anymore. For Scott and his partner Sophie, it’s all about “exploring the unknown” and while he certainly hasn’t turned his back on the coast that raised him, he has turned his gaze inland, seeking out new experiences in the great Australian deserts.

See also: There is some great 4WDriving to experience in Victoria's Alpine North-East

“Be prepared. Be. Prepared.”

Travelling deep into a desert like the Simpson requires the kind of planning normally practiced prior to launching a rocket into lower orbit. That’s not to say it is particularly hard to do, just that the appropriate time and research needs to be spent before you go tearing tracks in the great dunes.

“Research is key: every item you take has to be fit for purpose. The Outback is littered – literally littered with campers that weren’t up to the task.”

“Whenever we camp we want to take out MORE rubbish than we take in. When I was three I went camping with my Dad on Straddie — I want to take my kids one day. But if it keeps going this way we won’t be allowed to.”

See also: Clean Coast Collective are cleaning up a beach near you

It is an unfortunate fact that not everyone who enjoys the beauty of the outdoors also understands that they are responsible for keeping it beautiful. But it is encouraging to hear from Scott that most people he comes across on his adventures do. It starts and finishes with education. There wouldn’t be any wrecks in the Simo if people knew what they were getting themselves into and prepared accordingly.

This is the kind of knowledge that is best learnt from those who have been there. Scott has taken it upon himself to teach the young kids that come along on their journeys the correct way to explore the desert, the coast and the bush.

“My mate’s boy has just got his own 4WD and really wants to get involved. So I tell him to come round and I show him how to look after it, and teach him how to prepare for a trip.”

It might be hard teach an old dog new tricks, but the next generation of outdoor explorers are all ears.

Sorry Scott, I’ve forgotten…how long did you say it was until you leave for Fraser?

He paused, looking out at the rain lashing the windows.

Thanks Scott for the great photos!