Scott Ivey, our go to guide for all things camping shared with us the top five camping locations he knows he just has to experience before he kicks the bucket. Scott is already working his way through the list having ticked off three out of five already!

Located in Australia’s far North-West, the Kimberly makes up one of the nine regions of Western Australia. Characterised by hot tropical conditions, the Kimberly supports an extremely diverse range of wildlife.

It’s no wonder Scott is so keen to get out there with so many opportunities for camping, four-wheel driving, fishing and hiking.

The Kimberly presents a stark contrast to other remote Australian destinations with distinctive wet and dry seasons. The most popular time of year for tourists is around June-July as the weather has stabilised offering cool blue skies, warm days and cooler nights. One of the main attractions, the waterfalls are full and flowing this time of year.

If you want to avoid the crowds, September can be a great alternative time to travel as the heat discourages many from going out there. Just make sure you’re prepared for temperatures averaging between 35° - 40° C!

The Tip of Cape York, Queensland

High up on Scott’s list is a trip to the far North of Queensland to experience the northernmost point of Australia, the tip of Cape York: one of Australia’s truly unspoiled natural wildernesses.

Bordered by the Coral Sea and the Great Barrier Reef, Cape York is an outdoor destination to rival all others in terms of the activities on offer. Diving on the reef is truly one of the greatest experiences you can have, and the tip is famed for its driving tracks and fishing.

Before diving in, make sure you are across any rules and regulations related to vehicle use or fishing in the area as this is one of Australia’s great natural wonders and we need to keep it that way.

If you are new to the area, there are plenty of tour operators offering packages specific to your favourite outdoor adventure activities. Check out Mutee head and Jardine River as they offer unforgettable opportunities for four-wheel driving and beach camping.

The tip of Cape York is traditionally owned by the local Indigenous Australians who have made the cape their physical and spiritual home for thousands of years. Visiting the cape is an amazing opportunity to learn more about Aboriginal culture and way of life.

The world’s largest sand island is home to a diversity of wildlife and terrain that rivals any other tropical paradise you have experienced. Fraser Island is a world heritage listed site, and the only sand island in the world that is capable of supporting huge rainforests packed with wildlife and flora unique to Queensland.

You can be on Fraser in just over two hours from Brisbane making it a popular tourist destination. If you want to find a secluded spot while you’re there take the four-wheel drive with you. Four-wheel drives are the only vehicles allowed on the island, and you will need to pick up a permit from the mainland first before jumping over on the ferry.

75 mile beach is not only a hot destination for surfcasting, but also acts as a natural highway for 4WD users and a make shift runway for scenic flight operators too.

Fraser Island is famed for its dingo population, but the numbers have decreased in recent years. Visiting Fraser presents a unique opportunity to see one of Australia’s last remaining dingo populations in their natural habitat.

It’s not all dingoes though! The diversity of the wildlife on Fraser is truly stunning with all the usual suspects – wallabies, echidna, snakes and lizards – and even the occasional travelling saltwater croc making an appearance as they sometimes head further south during the warmer months.

As a Melbourne local, it’s not hard for Scott to get out to the high country and experience all of the outstanding outdoor adventure opportunities on offer.

The high country is an all year round destination, with skiing and snowboarding at Mount Hotham and Falls Creek in Winter, and mountain biking, fishing, hiking and camping possibilities galore through the warmer months (and winter too, if you’re game). The region is known for its fresh local produce with eateries and local producers making the most of what’s in season when it’s at its best.

If you’re into cycling, there are some of Victoria’s best rides in the High Country with climbs to challenge even the most hardened cyclists up the back of Falls Creek and to the top of Mount Buffalo.

Campgrounds are abundant surrounding the town of Bright and Mount Beauty. Scott’s custom built camper trailer has everything he needs packed away neatly behind the 4WD. Not a bad setup to consider sorting out for yourself if you want to make the most of your time in this perfect slice of Australian wilderness.

We can see a bit of a pattern emerging by this point: Scott clearly prefers his camping destinations to be as remote and as diverse as possible. If the Kimberly ticked the tropical box for Scott, the Simo certainly takes care of the dry and uninhabitable spot on the list.

Just because it is extremely hot and dry, that doesn’t mean the Simpson isn’t extraordinarily beautiful! The world’s largest sand dune desert is sure to surprise even the most open minded outdoor enthusiast with its infinite array of earthy colours and unique flora and fauna. Scott said that when it comes to sitting out under the stars on a clear night, “…nothing really comes close to the Simo.”

If you plan on taking a trip into the desert, you had better come prepared, however. Scott takes 20 litres of extra fuel and packs his camper trailer meticulously to ensure nothing can break and food remains fresh for as long as possible. If it’s your first time doing a trip like this, we would suggest getting some advice before throwing your gear in the 4WD and heading for the dunes.

See also: Clean Coast Collective are cleaning up a beach near you

Scott’s heart clearly resides here in Australia, so it’s only natural that he gets more from trips exploring the land that raised him. That coupled with the fact that most of his trips involve his camper trailer and 4WD means he has a tendency to choose destinations he can drive to. But we couldn’t help asking him if there were any international destinations he would love to explore in the future as well.

The archetypal image most of us have in our minds of a camping trip to Canada is about as close to a polar opposite from the one we picture of Australia that you can get. Canada is famed for its outdoor recreation. It has some of the best fishing in the world (totally unique to Canadian water), skiing to rival the European Alps and hiking, camping and four-wheel driving options to fluster even the most well versed outdoor adventurer. Canada is an explorer's dream and is surely a bucket list item for Scott, and certainly for the rest of us at Outdoria as well.

Parallels are often drawn between New Zealand and Canada. Perhaps that’s why Scott has thrown them both on the list. New Zealand is renowned for its extreme sports tourism industry. It might be a small country, but those who visit the land of the long white cloud are always blown away by what it has in store for them.

Driving for only a couple of hours you can move from the beaches of the east coast to the Alpine regions of the central plateau. You could hike, fish, climb, ski, fly and sail all in the same day and later bed down for the night in a national park surrounded by the forest and the abundance of native birdlife. Although NZ is far away from the rest of the world, once you get there, everything is at your fingertips.

Is there somewhere that you dream about travelling to? Let us know on Facebook or in the comments below! 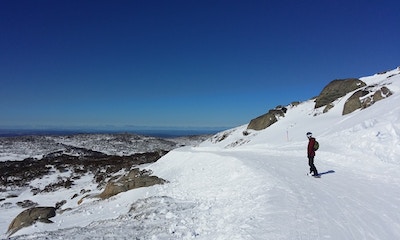 Once we figured out where to go and how to avoid crowds, Perisher quickly became our favourite stomping ground this side of the equator...