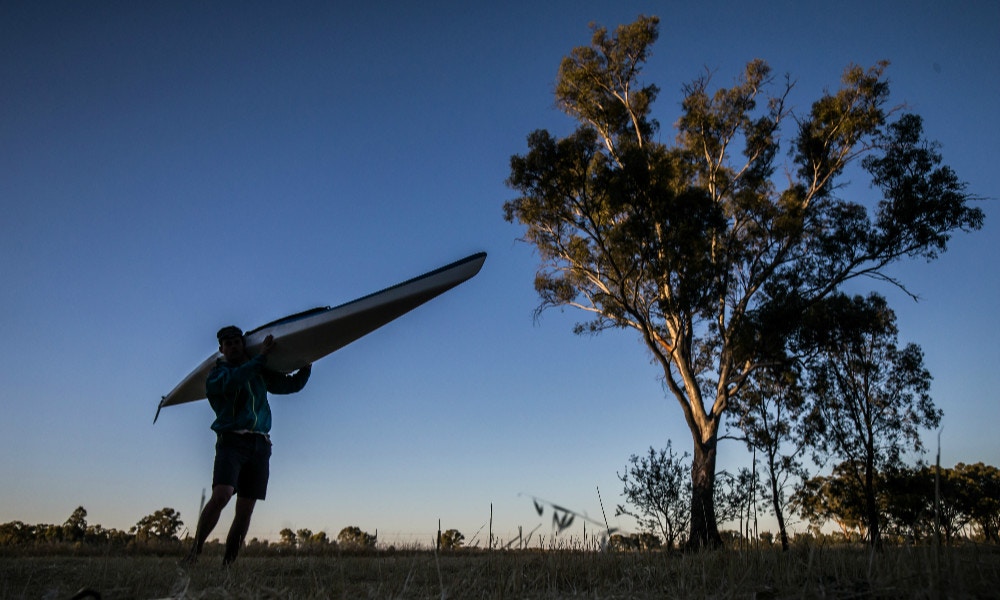 A more apt event name would be hard to find. The YMCA Massive Murray Paddle is one of the world's longest paddling races with participants covering an extraordinary 404km over five days!

The Massive Murray Paddle has just completed its 46th consecutive year and provides hundreds of thousands of dollars to supporting community programs. Between 2010-2013, participants have fundraised over $300,000.

The Massive Murray Paddle starts in Yarrawonga and finishes in Swan Hill making it the longest paddling event in the southern hemisphere. The race started from humble beginnings, ten friends decided to paddle the Murray River in 1969 to raise $250 for the Red Cross, and the rest, as they say, is history.

We spoke to three men - each very familiar with the Massive Murray Paddle - to get an insight into what it takes to complete the marathon paddle.

I was involved in my first Massive Murray Paddle in 1979 (back then it was called the Murray River Canoe Marathon) after a friend from Scouts encouraged me to come along and give it a try. That friend ended up pulling out before the start, so I got someone else to join me. Once I had entered I had to finish.

I did my second in 1980 with a former school friend then after a short break came back in 1983 as a solo paddler.

That year almost brought me to tears. The wind was so bad and the waves were three feet high. I honestly saw the same tree for 30 minutes. I was paddling hard but going nowhere.

What keeps you coming back to the Massive Murray Paddle each year?

You end up with a whole group of friends each year. Old and new, the environment just creates it. Everyone is up there to have a good time. It's very enjoyable.

Training the mind is just as important as training the body. It's like running a marathon. Firstly you need to learn proper technique. The best way to do this is to visit a canoe club and get a few pointers. Then lots of practice. If you prepare yourself properly, anyone can do it.

How do you training your mind for the Massive Murray Paddle?

Being on the water for 8.5 hours is a long time, so I break it down. I know I can paddle well for 20 minutes before I fall apart. So my strategy is to paddle for 20 minutes, then stop and have a drink. Then restart and go again. I never think about the finish line. When I get to the finish line, mentally I'm ready to paddle another 20mins.

How did you get the nickname Mad Mick?

The name Mad Mick was bestowed upon me due to my antics and crazy singing. I was asked to do some Dragon boat racing but never did because I couldn't train twice a week. My name went in the diary just in case as, 'Mad Mick' because my surname was too much to spell.

The name has stuck ever since.

Adam is a 46-year-old firefighter from Canberra who was the fastest boat in 2014. Adam took out the fastest double craft in 2015.

I've always been involved with the YMCA, ever since I was a kid at the Sailing Club in Canberra. The YMCA has played a huge part in my life growing up, and now my kids are involved.

My first Massive Murray Paddle was back in 1999/2000. Due to work I have missed a few editions since then, but now the event coincides with my time off, so it's perfect.

In preparation for the Massive Murray Paddle, I do a lot of marathon racing. Last year I trained very hard leading into the Hawkesbury Classic. Unfortunately, I didn't do as well as I wanted. I actually fell out of my boat and into the water at about the 80km mark. I was pretty tired, and had it not been for another boat, I probably wouldn't have got back in.

After that performance, I wanted to do really well in the Massive Murray Paddle. I had some rostered leave at the time so I would go out and paddle 20km really hard, come home for a sleep, take care of the kids, and then do it all again the next day. I did this for three days in a row and then had a rest. It got me significantly faster and stronger for the event.

See also: Outdoor adventures in Ballarat - are your bags packed?!

I was surprised how fast I was going actually. At the start of the Massive Murray Paddle you are asked to predict your average speed. Based on my predicted speed I was at the back of the field, but I was catching a lot of people during the race, so I knew I was going reasonably fast.

It didn't start so well though. I hit a snag 10km into the first day. The rudder came through the bottom of the boat and cracked it across ways. I finished the day with 9-litres of water in the boat!

The boat was held together with tape on the second day, and I was worried it was just going to snap in half. I had no steering, so I had to hip steer the whole way down, but it all worked out well in the end.

For those who are doing the event for the first time, I would say pay a lot of attention to your recovery. Make sure your eat and drink as soon as you finish, and even jump in an ice bath. I tried this last time around and found I bounced back pretty well.

Tom Simmut is a three-time winner of the Massive Murray Paddle and has overcome health issues to complete the 2015 edition. Tom was the third fastest single craft in 2015.

I started with the Scouts originally. We would do a lot of kayaking for fun and it then developed into a more competitive activity from there. I first got involved in the Massive Murray Paddle about 10 years ago. I am a member of the Lane Cover River Kayakers and each year about 20 people go down to compete in the event.

It's one of the toughest races in Australia which suits me. I'm generally pretty good at the ultra marathon events.

See also: Kids and Water - Keeping them Safe Over Summer

Get your seat right, get your diet right and get your training right!

If you are thinking of entering the Massive Murray Paddle, take some time to plan you fancy dress and chants for day four, which is known as 'Red Day. A day devoted to the YMCA, 'Red Day is all about getting into the fun spirit of the event and hopefully taking home the best-dressed award at the end.