The Kowalski Classic - a Race for Real Riders 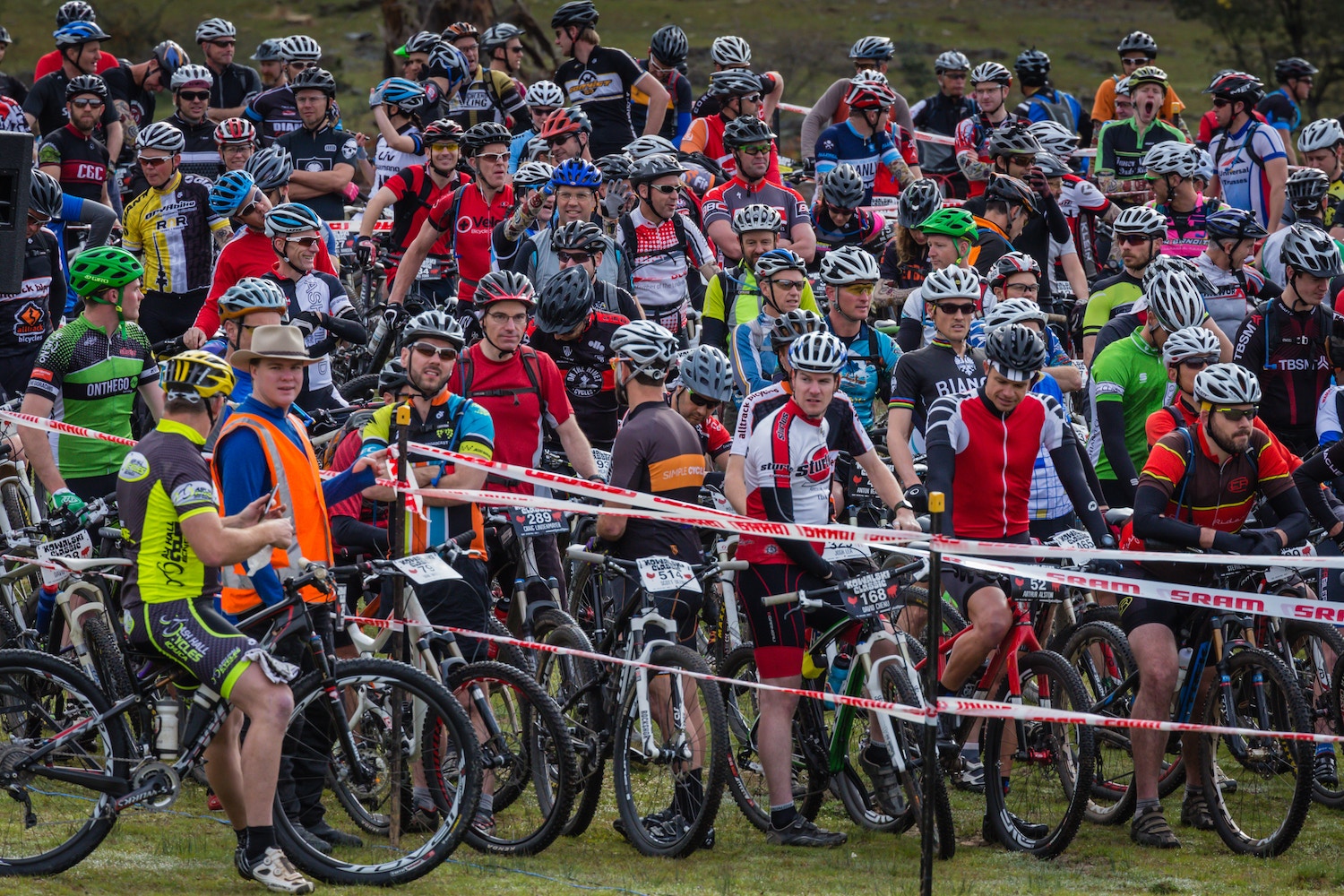 It’s a packed market for MTB races these days. It’s been a long while since I heard anyone say “I’d love to race, but there is nothing on for at least a month or two”.

It’s also been some time since the heady days of event organisers having to hire off-shore servers and borrow a NASA super computer to handle the extreme surge in traffic at 9:01 am when entries open…

It would seem intuitive that the two facts are linked.

It’s also pretty easy to compare your speed to that of your mates – and deal with all that ‘bragging rights’ stuff that ‘real racing’ used to be about. Via a virtual chat, over a virtual race, sometimes even taking place on a virtual island somewhere in the Pacific Ocean, you can quickly claim your superiority.

But that’s not what the sport really is, is it. That’s a statement, not a question.

The sport of Mountain Biking is about getting out onto trails, and riding the hell out of your mountain bike – the one that when you bought it, you wondered if you were spending too much, and then told yourself it was worth it because it would be faster and would last longer.

See also: Mystic bike park is one of the greats

So if a rider is faced with such a huge increase in choice, and also has the opportunity to ‘weight dope’ online in order to beat friends virtually – it continues to follow that when they do attend an event, when they pay their money to challenge themselves, they want it to be something unusual, something that they wouldn’t normally do – but something fun, and unique, and challenging in ways they can’t quite recreate via any other medium on another weekend ride…

The Kowalski Classic is a day of racing run by riders and trail builders who are looking to provide exactly that sort of event. Something that sits outside of the typical boundaries of MTB marathon racing. A race that equally rewards fitness and skill, or (if you’re a glass half-empty type) equally punishes lack of fitness or skill. And that is where it’s different.

The Kowalski Classic kicks off on the 20th of September - registrations close soon!

The trail network of Sparrow Hill and Kowen Forest have been lovingly developed for years now by the Kowalski trail building ‘syndicate’. In an era where MTB parks are increasingly being funded by local government investment to generate areas, or to provide leisure outlets for the ‘Youf of today’, the trails of Kowen and Sparrow are imagined, built and maintained entirely by volunteers.

Single trails of a couple of kilometres in length (including a couple of the new ones) have been known to take many months to build. Imagine then the time and effort that has gone into developing a trail network that can feasibly host a 100km Marathon, and lay claim to actually having had to reduce the amount of single-track in the course – in order that riders get enough break from the intensity to merely sip a drink or grab a banana!

All race distances – FULL (100km), HALF (50km) and QRTR (25km) – lay claim to being around 75% single-track. Race organiser Alan Vogt was very clear on how he wanted to cater to each distance: “Shorter distances are often seen as less important (or tacked-on) and see compromises in course design, technicality and rider enjoyment. Not so at the Kowalski. We recognise that it is where the majority of our racers are – so it would be madness to give them anything other than premium trail”.

I rolled out for a lap of the Half Kowalski (50km) course, which also sees use as part of the Full Kowalski 100km race, with Alan on a dry Sunday morning.

His passion for the trails and the event is clear from the minute he starts talking. Describing trails that you are expected to know, and intricacies of turns and tree stumps – “you remember the second tree, just after the banked left hand corner of the trail? Well, we’ve cut in a new link trail there – to join up to the trail that usually is ridden uphill, but this year is a descent”. He continues to talk but honestly, I can’t really hear him. Even if I could, I couldn’t really respond as we are flying down some of the trails that Kowen is so famous for – smooth, well packed trail, with roots, the odd little ramp (for all your Nino-style mid-race whips), over some man-made boarding and then spitting you out onto a little bit of fire-road, before turning in the opposite direction, off onto another perfectly shaped and bermed trail.

“Alan”, I shout. “These trails are really well brushed and cleaned up – must have been ages with the rake!”

“Ha-ha, not these days – we got our hands on a backpack mounted leaf blower (they call it the Kowalski Butt Gun™). It’s so powerful you have to lean into the trail when you use it – it will even blow fist sized rocks of the trail!”

The delight and pride in his voice tells as much as you need to know. Yes – he likes to imagine he is in the Ghost-Busters.

As we climb up towards the highest point of the race, Alan proudly explains to me “this is where we will put the Espresso bar this year”. Yeah – there is a Barista on a hillside, serving coffee to all and sundry. Why wait till the end?!?

See also: A European cycling holiday some of us dream of...

If you have ridden Kowen or the Kowalski race before, there are certainly trails you will recognise. And that’s a good thing – because they are great fun when you know them well. They never feel old and they are always linked in a way that makes them feel fresh. However, there were a couple of new trails that the Kowalski’s are particularly proud of, that I was itching to see. One is a descent, and the other is a climb. The descent actually links immediately into the climb – and these incredible trails come right at the back end of the race for the Half Kowalski (at 44-ish km) and relatively early on for the 100km riders. ‘Romper Room’ is the descent, and its starts like it means business.

Alan was out riding the new network a couple of weeks back when he came across Canberra local Yahansi Barreto.

Yahansi was pumped to run into one of the men behind these trails he’d heard so much about.

“I’d asked around about these new networks but nobody seemed to be able to give me clear info, it was a bit of a mystery. I went out a couple of times looking but couldn’t find it, so it was great to run into Alan,” said Yahansi.

“I discovered the network was helter-skelter. I love climbs and enduro events; that feeling of hunkering down and tapping into your power base to just keep going, and going, and going.”

According to Alan, “we wanted to bring a slightly different style of trail to Kowen – something a bit more demanding, like the trails we have ridden overseas – a little bit of Canada, Europe and NZ rolled into one”.

See also: Father's Day is just around the corner...

Rockier, a little steeper and with a bit more attitude than the trails you might typically expect, Romper Room was great fun. It’s not ‘dropper post’ territory (although when is a dropper ever a bad idea?!?) but it does require some concentration and finesse. We make our way down and are presented with the entrance to ‘Stairway to Heaven’ – a 2.2km climb (although its not all up – it gives a little back as you climb) that winds its way up via a series of bermed corners, and also a number of rock-steps.

In Yahansi’s words, “what helps set this course apart is all the obstacles – there’s something like 55 steps on Stairway to Heaven”.

None of the steps are more than the height of a normal kerb on a street, but it’s their placement that makes you have to think about them. Ratcheting pedals, and popping the front wheel – sometimes mid-corner, we get up there. Not 100% ‘clean’ the first time however – a few dabs on the way meant we went back and re-rode a few sections.

It’s really great to see this sort of trail being added to such a free-flowing area. Don’t get me wrong, the two newest additions have flow, but they require a bit of thought to master.

From the top, it’s a blast down some old favourites – Secret Squirrel, Kowalski’s Beer Garden, and Last Call – and straight into the finish for the 50km riders, but for the 100km riders, another 75km is out there for you…..

It’s an incredible race loop, and one that will test every aspect of your bike riding. A totally unique course. Whether you are there to race your mates; race yourself; justify your expensive bike purchase; or enjoy a day out on trails that won’t involve stray-dogs slowing your Strava segments, and won’t require you to check a map in order to plan a route that gets the most out of the network; The Kowalski Classic will have you smiling from ear to ear.

Like Yahani says, “you’ll be left with smile muscle fatigue”.

See also: Riding the highest road in the world, in India, on a tandem bike!

You’ll work for it, it will test your skill, fitness and probably also your sense of direction – such is the twisting and turning nature of the loop – but it’s a race that is unlike any other.

If you are only going to enter one race each year, you should probably make it the Kowalski Classic — as there is nothing ‘virtual’ about this race – it is 100% real mountain biking.