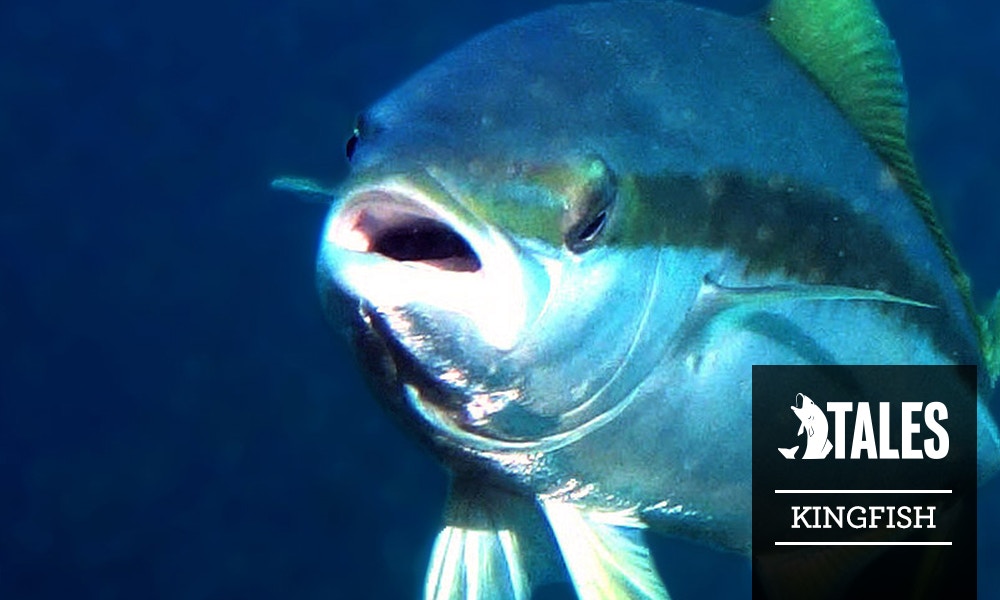 Every fisherman has a story about the one that got away, but we are more interested in the ones that stayed on the hook. Kiwi Travis tells us about another great fishing catch, this time his spearfishing adventure in search of a Kingfish.

In Search of the Kingfish

I was on holiday back home in New Zealand. The seas were finally calm, so my mate Aaron and me decided to dust off the spearguns and head out on a spearfishing charter around the Mokohinau islands in Northland.

Visibility was about 15m and there was plenty of life around. We had a pretty successful spearfishing day catching a variety of fish including Snapper, Pink MeoMeos and Trevally.

We had a few skittish Kingfish swim past us, but they were out of range. I managed to hit one, but it pulled itself off my gun... classic. The Kingfish disappeared for the rest of the dive and with everyone feeling pretty tired, we packed up and headed for shore.

On the way back to shore, we passed Simpsons rock. A large group of seabirds was circling above and then diving into the sea on a bait ball.

Not being ones to let an opportunity pass us by, we dived in hoping some Kingfish would be lurking in the area. We found a wall of Kahawai and Trevally and just as I was lining up my speargun, an inquisitive Kingfish swam by.

I was out of breath but didn’t want to lose my opportunity. I shot my speargun... BULLSEYE!

See also: That time I hooked a whale

Out of breath, I returned to the surface and dropped my speargun.

The Kingfish pulled away and managed to dislodge the spear from its side… bugger! It remained about 3m from the surface, swimming erratically in circles. I figured I must have stunned it.

I wasn’t going to lose this one as well, so I took a final deep breath and tried to retrieve the stunned Kingfish by hand. I managed to put my hands in its gills and bear hug it, attempting to wrestle it to the surface. This Kingfish wasn't going down without a fight!

I almost had my first Kingfish to the boat when it slipped from my hands. I somehow managed to clutch onto the tail as it dived for freedom. Aaron had seen the splashing and thought I was being taken by a shark. He raced over to see what was going on and with the help of a few of guys, we managed to haul my first Kingfish into the boat.

I was thrlled to catch my first Kingfish, but my ultimate fishing catch would be catching a blue marlin by spearfishing or the line.