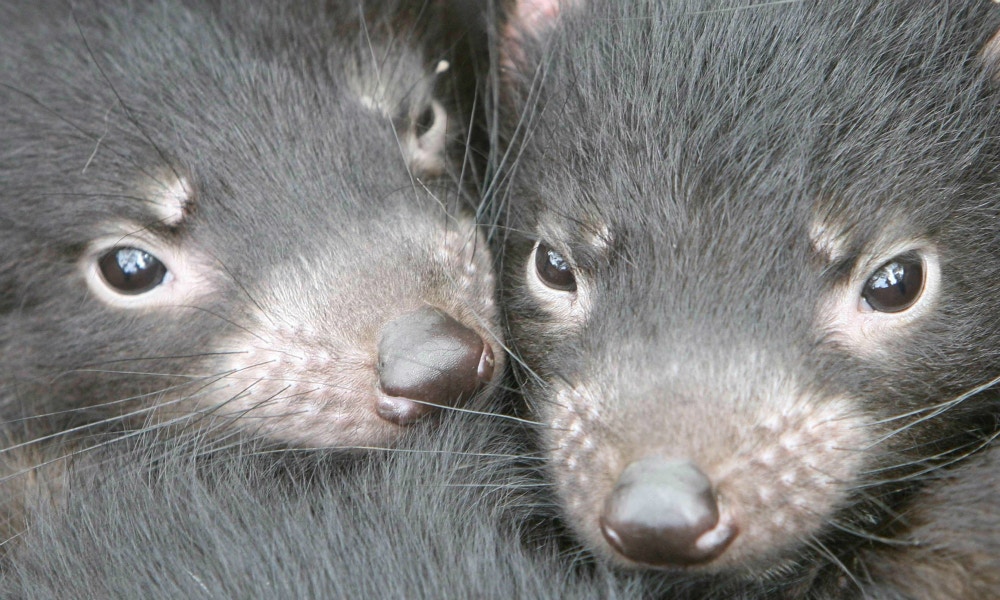 It was the mid 1990’s when a photographer roaming around Tasmania’s rugged Mt William came across a facially disfigured Tasmanian devil. He took some photos and sent the images to a Government Department. Alarm bells weren’t immediately rung, but we now recognise that as the first sighting of a Tasmanian devil facial tumour (known as Devil Facial Tumour Disease, or DFTD), a cancer that now threatens the very existence of the species.

To the credit of many, there has been an inordinate volume of work, research, volunteering and fundraising done into finding out more about the tumour and trying to prevent its spread.

We caught up with Devil Ark Supervisor Dean Reid to dig a little deeper on the topic of these little devils from the south, and the work being carried out to keep them on our planet.

How did Devil Ark come about?

Originally you could say we were part of The Australian Reptile Park, a sanctuary for native reptiles and mammals on the Central Coast of NSW. The Park initiated small breeding cycles in an effort to address the declining population of Tassie devils. The cycles ended up being very successful – they went from eight devils in 2006 to 58 in 2009.

To raise a devil in captivity costs anywhere from $7,000 right up to $20,000 per mammal, depending on the infrastructure already in place. This per capita figure could be significantly decreased if the breeding programmes were rolled out on a larger scale, and so five properties in the region were considered as potential locations for a Tasmanian devil-only sanctuary.

The 500-hectare property on which we are now located has been leased to us by the Packer Family for 30 years.

So we moved in about five years ago now and it’s where Devil Ark calls home. It’s here that we breed Tasmanian devils in an environment and situation that best mimics their native habitat. We established our population with half of our original devils coming from The Australian Reptile Park, and the other half from Tasmania (and, of course, free of any facial tumours).

Why that particular property?

Aside from size, it does an excellent job of emulating the natural environment in which you’d expect to find Tassie devils thriving. At 1,400m elevation we will see snow each year – devils can handle the heat but they really would prefer not to have to. There’s a lot of snow gums, tussock grass – plenty of hiding spots for the devils – which they love. We also have wombats, echidnae and quolls – there is an incredibly rich biodiversity here which is just right for our little devils.

Tell us what makes wombats particularly useful for Tassie devils.

Out in the wild wombats pretty much serve as property developers and landlords for Tasmanian devils. Within say a 1km radius of native bush you can expect a single wombat to build three to four holes, and they’ll just move from hole to hole as they see fit. Tasmanian devils are opportunists – they’ll move into a temporarily vacated hole and call it home until the landlord returns.

And then what happens?

Well, it’s quickly sorted out that the hole belongs to its maker. Tasmanian devils can be aggressive, but so too can full-grown adult wombats. You don’t mess with an aggressive wombat.

We are currently only using a portion of the land allocated to us, but within that portion we already have 13 enclosures and 137 Tasmanian devils. We try to replicate how things would normally happen in the wild, so each enclosure is home to four female devils and four male devils.

Tell us about the actual breeding of the species

Well the species is hierarchical and is dominated by the female, who is of breeding age from between two to four years, whilst the male breeding age gets an extra year. A male successful enough to breed with a female has to be very dominant indeed, otherwise he doesn’t stand a chance with her.

The female will go into a breeding cycling in late February. If she doesn’t fall pregnant in that first cycle then her body will take a month off before going into a second cycle. Again, if she doesn’t breed, her body has another month off and then she has a third and final opportunity to fall pregnant. If this doesn’t happen third time around, she will never fall pregnant.

If she does fall pregnant she goes into what is essentially a comatose – her body is positively flooded with hormones. This gives the male an opportunity to enter her area and breed with her. He’s got four days before she snaps out of this comatose state, at which point she will kick him out. When he’s not breeding with her during those four days, he’s usually standing guard outside her den to ensure no other male opportunists try their luck. This isn’t always successful, actually, and sometimes a Tasmanian devil will give birth to half her joeys from one father, and half from another.

After breeding it’s a 21-day gestation period before the female again goes into a comatose state. This time however, she assumes what you’d probably call the “Downward Dog” pose if you did Yoga. A trail of mucus comes out her cloaca (a cloaca is a single cavity and tract for excretion and sexual reproduction found in many animal species), gravity streaming it down into her pouch. This mucus delivers up to 40 joeys, each no bigger than a grain of rice.

But it’s survival of the fittest and toughest right from the get-go with Tasmanian devils. The mother only has four teats, meaning only four of those rice-sized joeys will have an opportunity to live, sometimes even less.

Importantly, the mother can snap out of her comatose state during this birthing period and can essentially decide to call the whole thing off. For this reason we are extremely quiet at Devil Ark that time of year – we don’t run car engines or make any noises that might startle her out of this state.

Back to the joeys. When they’re born they have a head, two front feet a bit of a back bone and no rear feet, so they really have to all fight for that teat. They have little brain activity at that point so it’s all about instinct telling them to smell out their mother’s milk and to latch on. They do this for about three months. From about four to nine months the mother will return to the den with very small pieces of meat, introducing this into their diet. Then at ten months she just ups and leaves them – they’re on their own to get by.

What do Tassie Devils eat?

They’re called the vacuum cleaners of the Tasmanian wilderness. They essentially clean up after all the other carnivores, eating left-over bits of meat.

What is the life expectancy of a Tassie Devil without a facial tumour?

Life is tough for Tassie devils, especially the males, who really have to put up a fight for a female. They’ll get really beaten up and usually only survive five to six years in the wild. In a sanctuary situation I know of a devil who’s lived to the ripe old age of nine, but that is really getting on.

Do you release portions of your population into the wild?

That’s actually an exciting update for us. We work with the Save the Devils programme, who are responsible for releasing all Tasmanian devils destined to return to the wild. They’ve just sectioned off part of the Tasman Peninsula to which 30 of our devils will be relocated.

What about the facial tumours? What is the latest news there?

The University of Tasmania has been doing some outstanding work in this area, and it looks like they may very well have developed a vaccine, provided the animal receives four booster shots in a year. It’s an insidious way for the devils to die – even though all we see is the grotesque and painful looking tumours on their faces, that’s just the tip of the iceberg. Their whole system is riddled with it by this point. However, like many wild animals, they won’t show their distress because to do so is of course making yourself vulnerable to threats from either your own species, or other predators.

Can you tell us a bit about your role at Devil Ark?

Sure. My work day starts at 7.30am. I will do a circuit of the external perimeter checking to ensure that no trees have fallen onto the fence line. Then I will do a circuit of the internal perimeter checking for the same thing. A felled tree could be an opportunity for Tasmanian devil escapees, which is obviously something we don’t want to entertain. That said we have traps in place serving as a Plan B should ever this happen – they’re like long white cylinders sealed at one end, and with a bit of meat at the very back. The animal walks in for the meat and releases the trap and is contained until I come and check it, which I do each morning. Sometimes I will find other native animals in there, which of course I then just release.

After the checks I then fill the late morning with odd jobs, of which there is an endless stream to take me to my lunch break. For example at the moment we’re working hard to eradicate Scotch Broom from the area. This is an introduced species of plant that latches onto our native trees and kills them. After lunch, it’s chef time. I prepare kangaroo meat for all the devils. They each get about 500g portion of meat a day. Then I basically spend the afternoon feeding out before returning to clean down the preparation area.

Who funds Devil Ark so you can be doing all this great work?

It’s a combination of corporates, public donations, tax appeals, and the occasional Government contribution. We also have a merchandise store as well as a volunteer group called the “Devil Ark Advocates” who represent us at events and help raise awareness for us.

What are your details for people reading this who want to find out more/ make a contribution?

For more information or to make a donation, they can visit our website www.devilark.com.au

Dean – it has been totally fascinating chatting to you. Well done to Devil Ark and all the outstanding work you and your team is doing and thanks for your time!

See also: Tim Spiteri rides from Melbourne to Broome...and back!