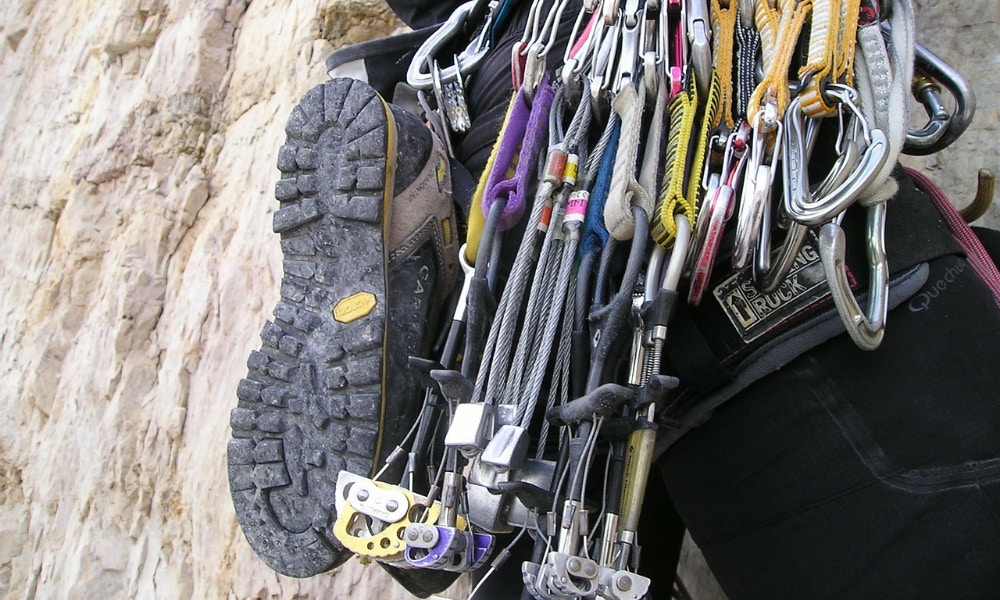 Rock climbers, ice climbers and alpinists use a huge range of tools and aids when attempting to ascend a climbing route.

They usually carry these tools and aids with them in order to utilise them on the wall. Devices used by climbers to help protect them from a potential fall are referred to as protection or ‘pro’ for short. Other accessories and miscellaneous equipment can be used both on and off the wall in order to aid the climber during their ascent.

Sometimes referred to as ‘draws’ by those in the know, quickdraws are basically two non-locking carabiners connected by either a fixed loop of webbing (sometimes referred to as a dogbone), or a longer sling or runner which can be adjusted by doubling over on itself. Quickdraws are used for creating a connection between the climber’s rope and the protection that has been placed in the climbing surface. The two carabiners will usually be slightly different. The one connecting to the pro will be have a straight gate as this reduces the chance of it the connection failing. The carabiner that attaches to your rope end usually features a curved or bent gate as this makes it easier to attach with one free hand. Quickdraws are not only used by climbers in the outdoors; they are often fixed permanently to anchors on artificial climbing walls, enabling climbers to practice lead climbing without having to carry draws with them.

The earliest form of climbing protection came in the way of Pitons, which are essentially spikes that are hammered into the face of the wall. Pitons feature a loop at the end closest to the climber that can then be clipped into using a carabiner, the climber’s rope passed through it and secured. Pitons permanently damage the rock face, however, and have been criticised by climbers who prefer to climb clean, using more modern protection that is easily removable.

Active pro functions is such a way that it exerts additional force against the surface of the rock when down ward pressure is applied by the rope. Passive protection must be inserted into gaps in the climbing surface and lodged into a static position.

The concept behind the nut is fairly simple, it is basically just a rectangular or wedge shaped metal block attached to a length of webbing or more commonly, wire. They can be jammed into cracks in the climbing surface and pulled, lodging them in to place. Nuts are attached to using a quickdraw which you then attach to your rope end. Multiple nuts can be lodged in one place in order to improve their holding capacity in case of a fall.

Hexes function in a fairly similar way to nuts, except that they are unique in that they are capable of acting as both active and passive pro. They can be lodged in a passive position, but more commonly are used in situations where downward force would cause them to twist in cracks in the climbing surface creating more pressure between the surface of the hex and the rock creating a stronger connection.

SLCD’s are different to other pro in that they feature a moving mechanism that allows them fit into and expand within spaces in the climbing surface. By pulling or squeezing a lever, the SLCD retracts allowing it to be inserted into smaller spaces, and expands once the trigger is released. When pressure is then applied to the device by the downward force of the rope, the cam exerts more outward pressure on the surface of the rock. SPCD’s carry the benefit of being easily removed after use.

Some climbing protection is used specifically when bolting into a wall – making very strong connections that are either intended to be permanent or that will create permanent marks in the climbing surface. These pieces of gear are also used in creating permanent fixtures in indoor climbing gyms. Pulleys in particular are used for hauling gear up to a pitch once it has been climbed.

Quickdraws connected to bolts in the wall

Chalk is used by climbers to dry sweat from their hands, enabling them to maintain a good grip on their climbing surface. Climbers carry their chalk in a chalk bag that they usually secure around their waist, either by clipping it to their harness using a carabiner, or by using an adjustable strap. A strap is sometimes preferable because it allows you to change the position of the bag so that it is easily accessible relative to your position on the wall.

It’s important to look after your ropes; after all, they are your life line on the wall. Storing them in a rope bag at the base of the wall while climbing and while in transit will help keep them organised and clean. Some rope bags can act as haul bags as well, allowing you to transport your gear up the wall to the top of a pitch during multi-pitch climbs.

Climbing backpacks are designed to be comfortable while climbing, and are also capable of carrying a range of climbing gear. If you are carrying a lot of extra weight on your back, you may need to use a full body harness in order to compensate for your change in centre of gravity.

Mostly used by ice climbers, crampons are spiky attachments that can be strapped to the base of your boots in order to help you grip your climbing surface. Crampons used in conjunction with an ice axe, they are the ultimate tools for an ice climber to scale a vertical wall of solid ice.

No matter what sort of outdoor climbing you are performing, a helmet can protect your head from falling debris. In some cases they are essential for the belayer as you may be standing directly below the climber who may cause rocks or ice to come loose from the wall as they climb. Caving often requires that participants use a range of climbing related gear, and a helmet is usually mandatory.

Climbers sometimes require additional lighting while ascending a route or tackling a problem. It can get dark quickly when caving or when working into deep crevasses in the rock. A head torch, lantern or flash light is ideal as a reliable source of light in these complicated situations. 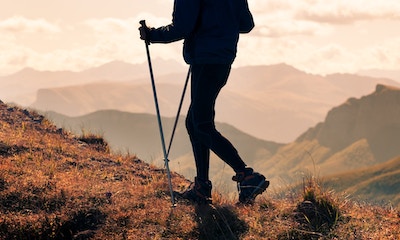 Lightweight Hiking Hacks: how low can you go?

Keen to lighten your load? Hack your hike with these easy tricks for carrying less weight on your next multi-day trek...... 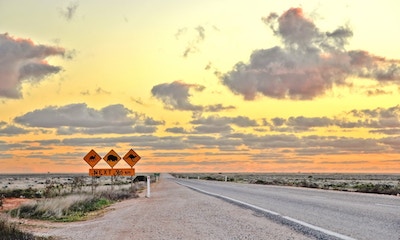 Self-driving Australia is awesome but damn the roads are long! Kill some time (and stay awake!) with these driver-inclusive road trip games for grown ups.... 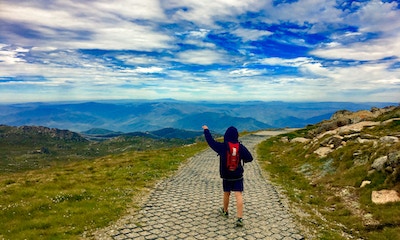 Want to know the best hikes for little tykes? Outdorian Jaclyn shares her favourite kid-friendly bushwalks from around Australia...