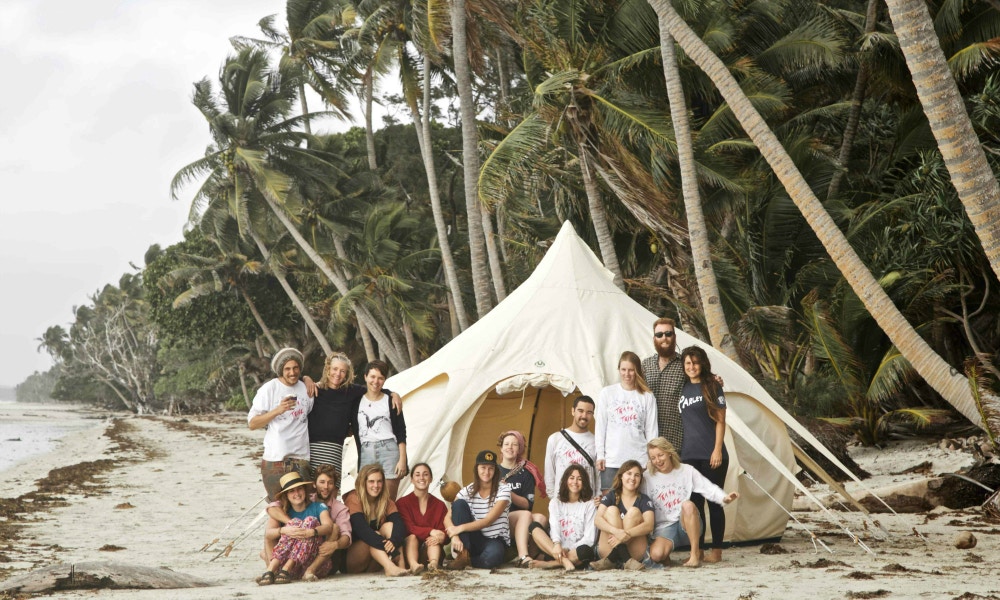 Each year it's estimated that 6 million tonnes of rubbish ends up in our oceans. The majority of this is made up of plastics which don't break down and cause extensive damage to our coastline and marine life. That figure equates to roughly 13,000 pieces of plastic for every square kilometre in the ocean – a scary figure that is on the rise.

Not content to sit back and let this problem continue, Natalie and Daniel created the Clean Coast Collective, a group committed to cleaning up our coastline and spreading the word about maintaining and preserving our marine ecosystem. The simple message "Avoid. Reduce. Reuse. Recycle." is a very effective one, and steadily gaining traction.

We had a chat with creator Natalie Woods about Clean Coast Collective and the group's latest trip to tropical Chilli Beach on the east coast of the Cape York Peninsula.

How did Clean Coast Collective start?

Dan and I were just two surfers hanging out at the coast every weekend. We'd go hiking to remote beaches to escape the crowds, but regardless of where we went we kept finding large items of rubbish that had washed up. We started picking the rubbish up and disposing of it as we went along, but this quickly grew to us taking garbage bags with us so that we could clear greater amounts. It then grew to Clean Coast Collective as a way to involve our surfing community.

We started to engage friends to help us, and then once we did an area we decided to take the concept to a larger scale. Through our crowd funding campaign we were able to secure enough resources to start 'Trash Tribe' and 'Trash Safari'.

Can you tell us about your first program, Trash Safari?

In 2014, Clean Coast Collective embarked on a six month journey around the Australian coastline, cleaning up beaches and meeting with local groups and rangers. Along the way we would support other groups with their clean up efforts, and help spread the word about all the good work these groups were doing.

And what about your latest program, Trash Tribe in Cape York?

This year we put together project Trash Tribe after realising on our first trip how bad the problem was. We were blown away by the amount of rubbish on our shores and how bad the marine problem was. We felt a bigger crew was necessary so we put the word out for people who would be interested in helping.

Ten people from all over Australia were selected to help the cause but also go away and spread the message in their own special way.

Each person had to pitch a project plan for how they would spread awareness of the problem. We had artists, musicians, journalists and various other occupations all coming up with great ideas to get the word out and hopefully shine a light on this problem.

The trip involved travelling to tropical Chilli Beach on the east coast of the Cape York Peninsula and spending six days cleaning the long stretch of beach. In that short space of time we cleared three tonnes of marine debris!

How does that even happen?

A lot of it comes down to single use plastics - cans, bottles, food packaging, toothbrushes etc... All up we collected 94,000 items. We sort and count everything we collect, sending all of that data to the Tangaroa Blue Australian Marine Debris Database – a national database of all marine debris collected along the coastline.

In the northern part of Australia we have the problem compounded by rubbish coming in from other countries on the tides and after big swells.

See also: More great reads and adventures on our world of outdoors blog

What can people do to help?

Start taking notice of the plastic you are consuming. Almost everything bought at the supermarket is packaged, so try and think of ways to cut that out: reuseable bags, coffee keep cups, buying items like grains and nuts in bulk, bamboo toothbrushes.

A big problem is people are very quickly overwhelmed by the breadth of the situation and feel like the problem is insurmountable, but if everyone just focused on small day to day things they could do, it would make a huge difference.

What are some key lessons you have learned from your work?

There are a lot of really positive and motivated people that are keen to help out; we meet so many artists and creative people who are doing their thing passionately, and are willing to promote the cause. The power of community and connecting with people is something we have taken away from our trips.

Perhaps another Trash Tribe trip to either Cape York, or to another local area.

We are trying to create impact and change consumer behaviour which is incredibly hard. People don't want plastics in the oceans, but don't realise the take away coffee cups they consume end up in there, or the straws in drinks when they're at the bar will end up there. Changing behaviour is a tough process, changing it on a larger scale is even harder.

The biggest message we want to get out there is if everyone can make small changes to help the cause it will make a huge difference.

Clean Coast Collective is creating a collective movement against the issue of marine debris on Australia’s coastline. The Collective is a community of those who thrive and survive off saltwater – surfers, divers, fishers, marine researchers, environmentalists, even the holiday beachgoer – all play a part in the protection of our coastal playgrounds.Through regular beach clean ups, CCC removes marine debris from the Australian coastline and encourages others to join and lend a hand. Follow the CCC on instagram via @cleancoastcollective