Camping with Ghosts at Big Bell 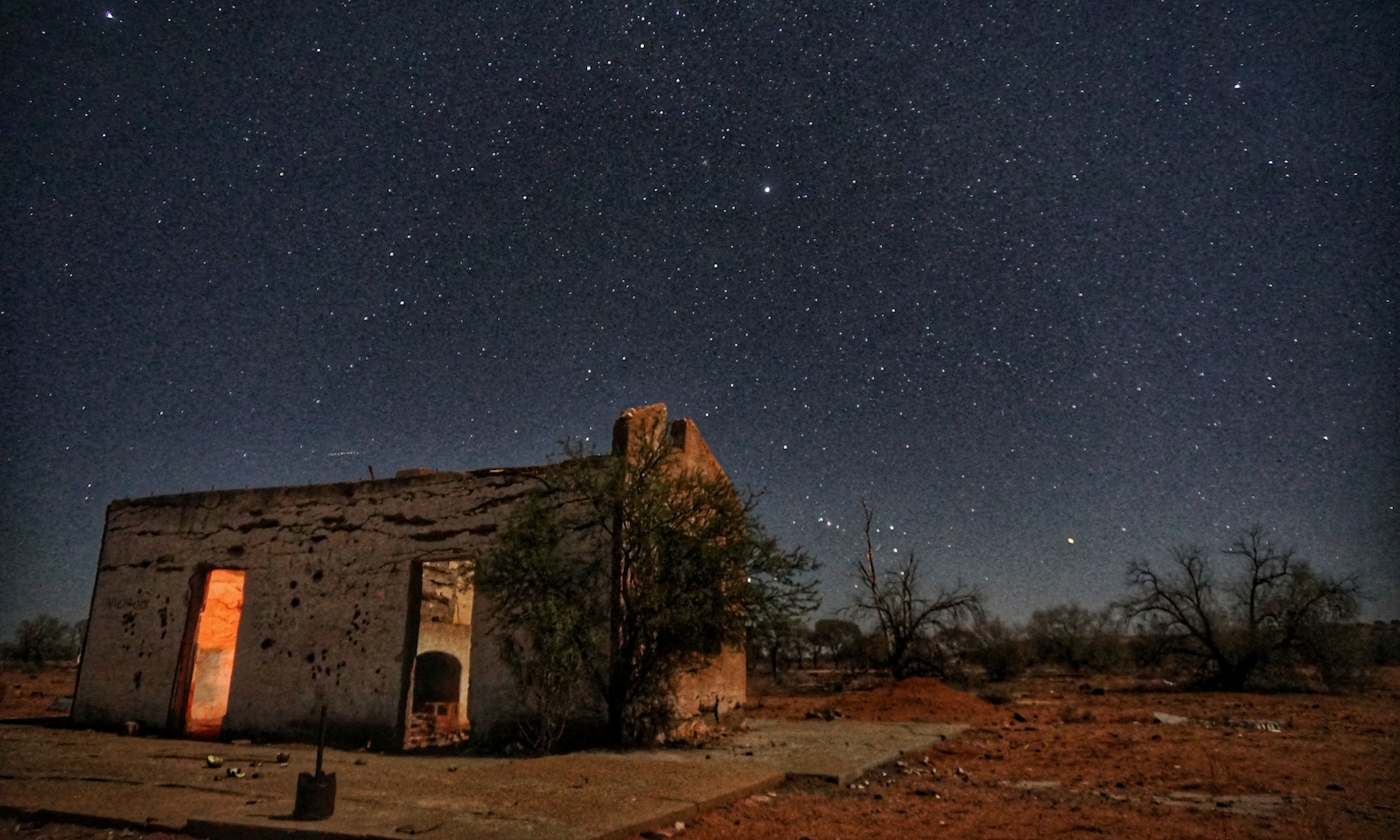 We’d been wanting to get out to the former town of Big Bell near Cue in Western Australia for months - ever since we saw some photos from another travelling family. It looked so beautiful and unique – where else in Australia can you camp, free of charge, under a wide open sky, in a former ghost town with stunning ruins that haven’t been inhabited for over 60 years? So we made sure to add it on to our Western Australia itinerary, and we were not disappointed. 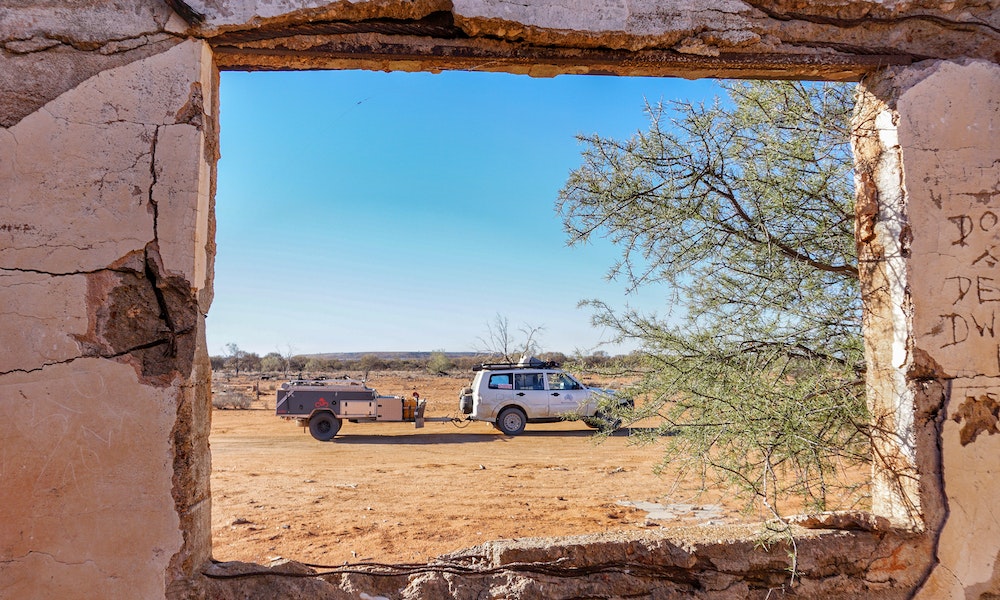 But first, some history

The town of Big Bell began back in 1936 to service the nearby Big Bell gold mine (well before the days of FIFO like we see today). At its peak it had a population of up to 1000 people and included three churches, two schools, a post office, a bakery, various shops, a movie theatre, a train line that came out from Cue, and a huge pub with, rumour has it, the longest bar in Western Australia (or perhaps even Australia, depending on who’s telling the story). Big Bell flourished until 1956 when a combination of a decrease in mine production and the cessation of the railway resulted in its eventual demise. Most of the properties at the time were relocated elsewhere but the ruins of three main buildings remain, including a church and most spectacularly the old Big Bell Hotel. 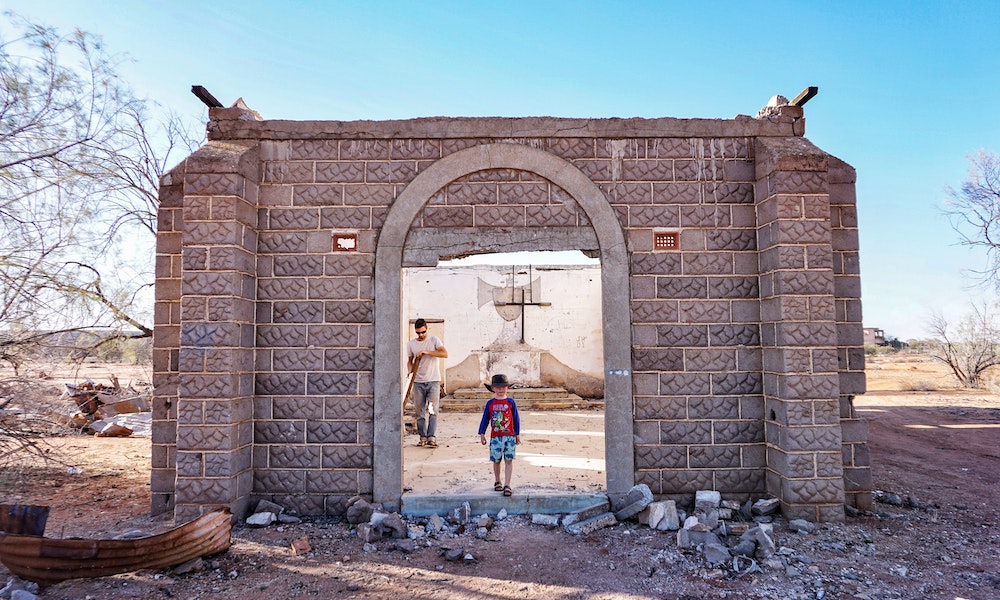 The former town of Big Bell can be found about 27km NW of the town of Cue in central WA. Cue itself is a bit of a ghost town these days, but it does have a couple of pubs, a tidy caravan park, a playground with a free water park, and a nice little café. Plus is offers a fantastic free parking area for tourists passing through that has free Wi-Fi, taps with potable water for you to fill your tanks, bins and picnic tables, making it worth a stop on your way through. From Cue it’s about a 30-minute drive out to the Big Bell site – the last stretch is dirt road but as the same road services an active mine site, its kept in pretty good nick. Now you could just pop out to Big Bell for a quick look around on your way through, but the real magic happens here after the sun goes down, so if you really want to experience it then you’re going to have to spend the night. 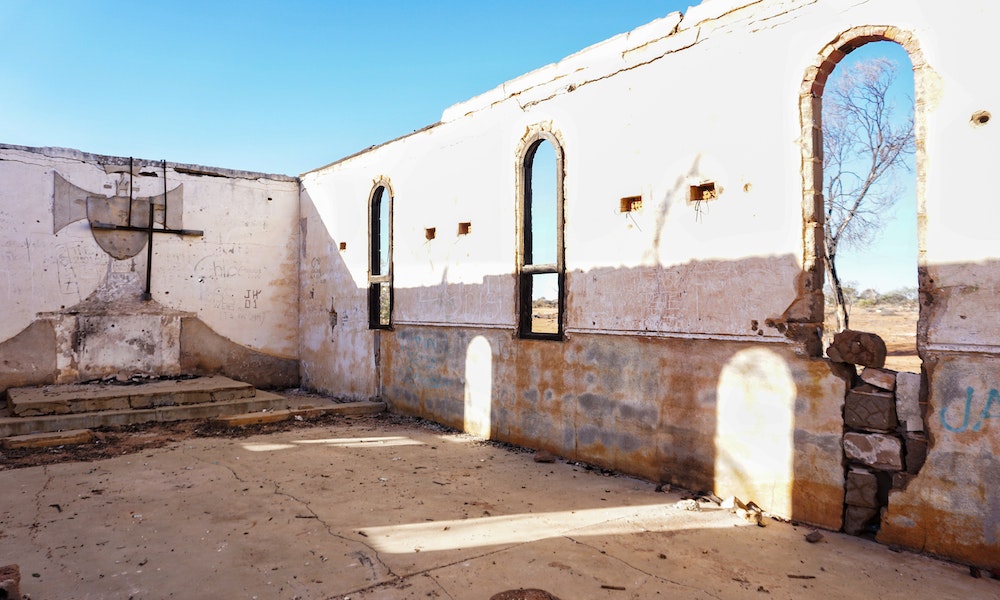 Sleeping with the ghosts

‘Ghost town’ is a dramatic & descriptive term, but unfortunately it doesn’t actually signify the presence of any actual ghosts, it simply refers to a town that has been abandoned. In fact we’ve never heard any stories of supernatural activity at the site (sorry to disappoint you). But it is still a pretty eerie experience sleeping out in an abandoned town with no other living souls around, so you may have to do what I did and put your big girl pants on, and remind yourself you ain’t scared of no ghost. But once you can get your imagination in check, this really is a fantastic, unique and beautiful place to camp. Not only is it absolutely free but you’ll likely have it all to yourself to explore to your heart’s content. And where else would you find a free camp with a slab site and a camp kitchen (albeit 80 year old with crumbling walls and no roof)? 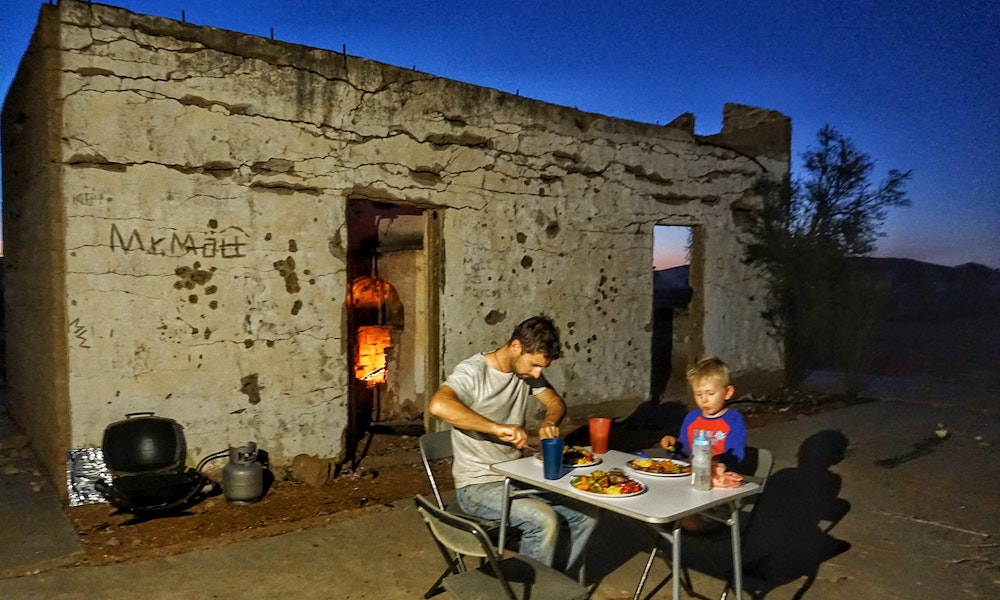 We spent just the one night here, with another night in at Cue itself. We drove in late one afternoon, and took a little tour of the site. There are a couple of information boards showing what used to be where, and a map of the former town. Most of the slabs are still in place, giving you an idea of the layout. And there is plenty of rubble and old bric-a-brac to explore. 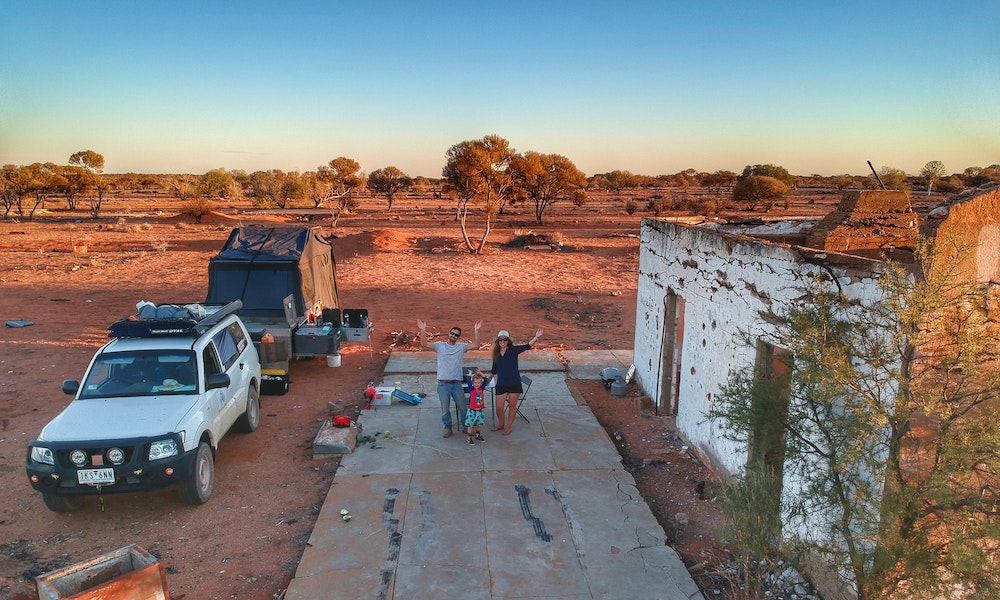 We saw just one other person out there – a nice man who was working in town at Cue for the day and just popped out for a quick look around before heading back to town. Before the sun goes down there is also a little bit of mine traffic on the road, but after dark it was just us. You can choose to camp pretty well anywhere, but we chose one of the old buildings with a concrete slab around it that we made the most of. The fireplace in the building was still very functional meaning we were able to build a fire in the 80 year old hearth which was an amazing experience, particularly as there was no roof so we could sit back with a clear view of the sensational clear night sky. 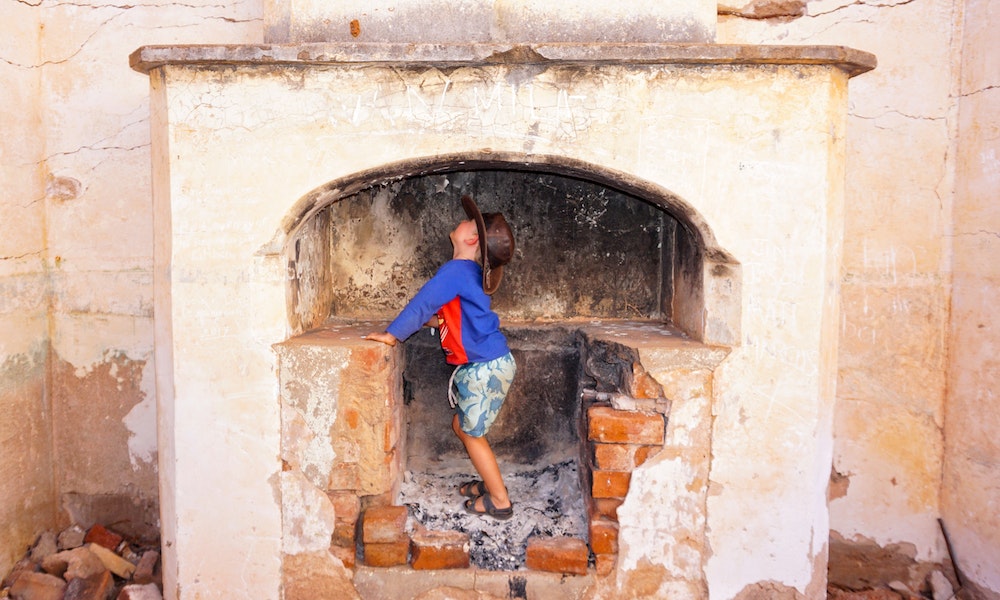 A tale of two pubs

As an interesting footnote to this story when we were back in Cue we met a nice local bloke at the pub who told us an interesting story. He said that the Big Bell Hotel is actually a twin, with a sister hotel still living. He told us that the same person owned both pubs, and built them both at the same time, to the same design. But of course the Big Bell Hotel has been abandoned and left to ruin for over 60 years, whereas it’s sister, The Como Hotel is still up and running 700kms away in Perth. We wanted to know more about this so we scoured the internet but couldn’t find any mention of the two pubs. Then we spoke with staff at The Como, but they too had never heard the story, and knew nothing about the Big Bell Hotel. So it seems we may never know for sure. But we did take some pictures of the two of them together so you can have a look and decide for yourself. To me it does seem like we’re looking back in time to how the Big Bell Hotel must have looked in it’s prime, before it sadly became just a ghost of its former self. 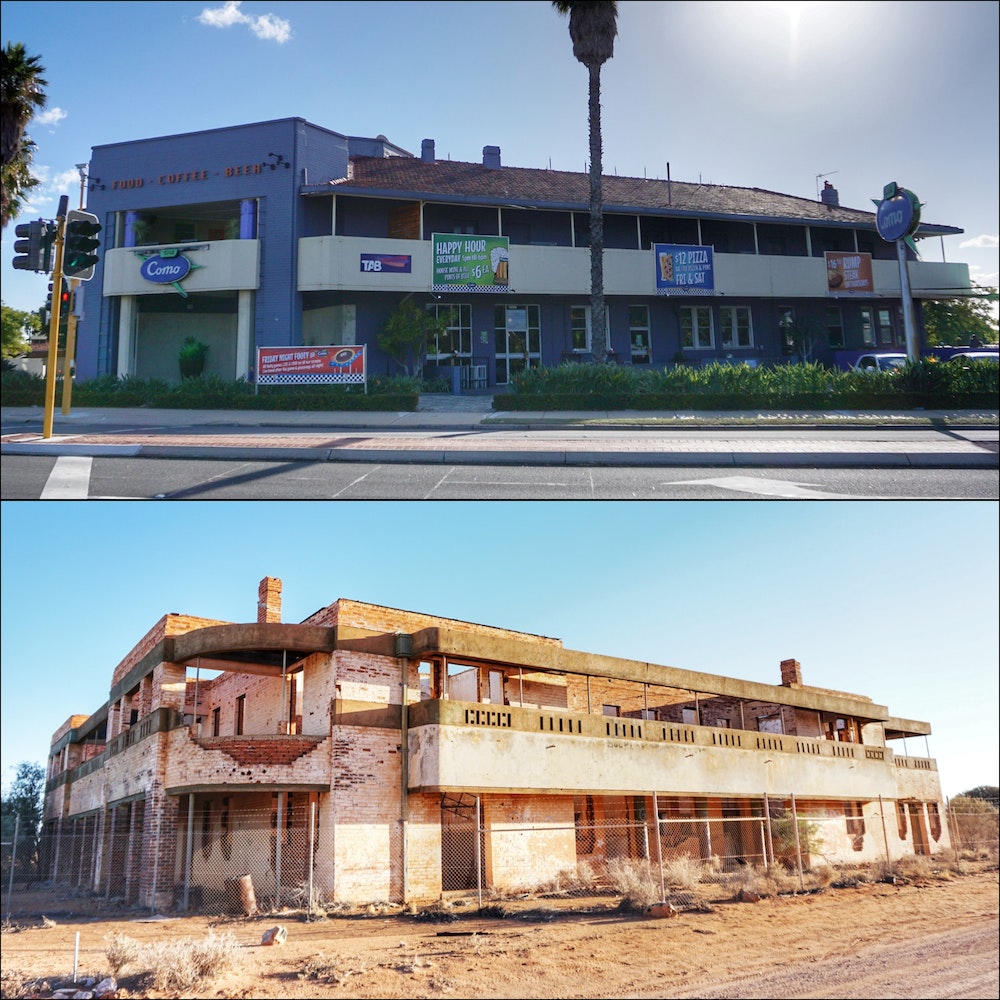 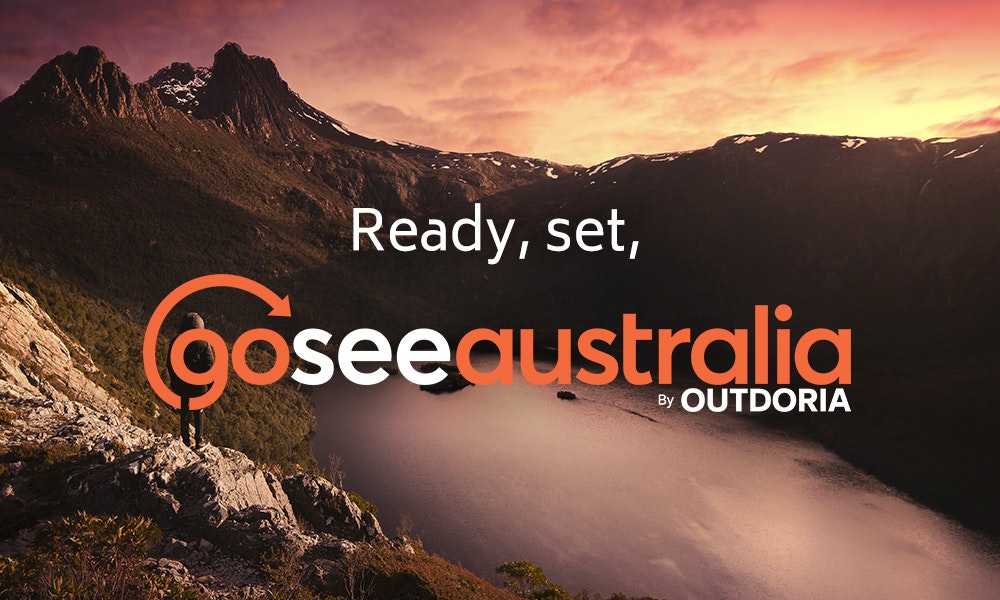 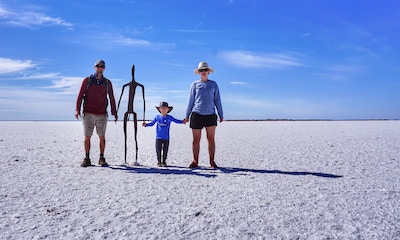 Lake Ballard is like nowhere else on Earth. Not only is the salt lake a stunning attraction in its own right, it is also home to an excellent open-air gallery.... 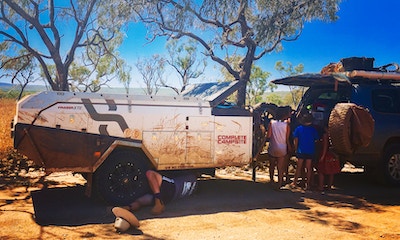 Make Like MacGyver: snapped brakes on the Gibb River Road

Some serious MacGyver skills were in order when Outdorian Jac and her family found their brake line snapped on the Gibb River Road in the Kimberly! ... 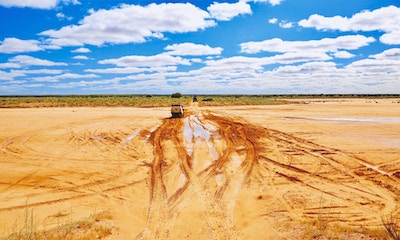 That Sinking Feeling: getting stuck in the Simpson Desert

No stranger to a misadventure, our nomad Susan tells us about her not-so-seamless traverse of the Simpson desert....