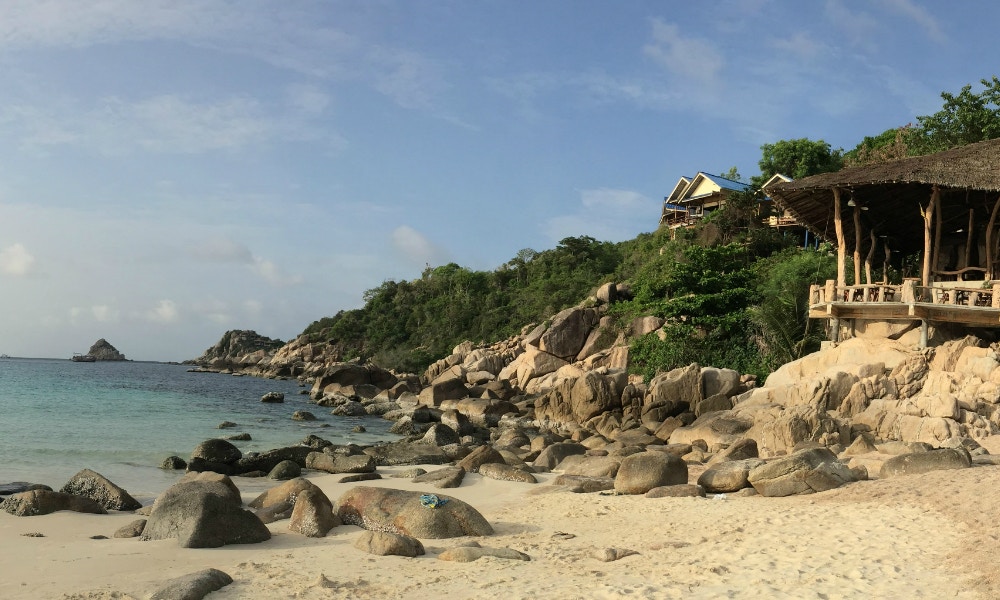 The way I saw it, it was going to be a relaxing holiday on the beach with my girlfriend. Nothing but sunsets and hammocks and piña coladas in the sand. We were going to Koh Tao, an island paradise in the Gulf of Thailand, just far enough away from Koh Samui and Koh Phangan to ignore the full moon parties and techno music and backpackers drinking a mixture of Red Bull, LSD and bad decisions out of plastic buckets.

I planned to lie on the beach and let my mind rest easy, finding a tranquil place with thoughts of neither past nor future, with a soundtrack of gentle waves lapping at the shore.

I've never been able to sit still for more than 25 seconds in my entire life, why did I think I would suddenly go all zen just ‘cause I'm on the beach? I grew up on the Otway surf coast, where beaches are places you run, jump, play frisbee, go fishing for big-ass fish, surf, jump off rocks and generally just expend as much energy as you possibly can before you eat fish and chips and pass out.

I JUST NEED SOMETHING TO DO!!!

So I lathered up on some sunscreen and headed for the rocks. Beachside rocks are home to hours of entertainment - you just need to clamber over a bunch of stuff to get to it. Actually, the clambering is the entertainment, so I started leaping over boulders and balancing on crevasses for no reason other than I wanted to say that I did it. Along the way I discovered lots of driftwood bamboo, old fishing nets, about a thousand mismatched sandals and marine rope of all sizes wedged hard into the gaps between the rocks.

Now, I've seen my fair share of Bear Grills. I've also seen Castaway. I felt like I was destined to … build a raft.

Pretty soon I had a collection of nice bamboo lengths and some good rope which I trekked back to a nice flat rock I had decided to use as my construction site. After realising that the rock I had chosen was in the path of a toilet runoff from a hut further up the cliff, I quickly chose another, equally flat rock that didn't smell quite so much like human excrement and set to work lashing the bamboo together. To maximise my rope I separated the coils, splitting each heavy cord into five smaller chords. This was an extremely frustrating process that took forever and the whole time I was thinking to myself "there's probably a really easy way to do this that I don't know about". I felt like a caveman rubbing two matches together to create a spark because he doesn't know what the red bits on the end are for.

See also: Clean Coast Collective are cleaning up a beach near you...

I lashed the strongest bamboo into a square. I added an extra support bamboo length down the middle of the square and flipped it over. I started by lashing the planks which would be the platform of the raft to the middle bamboo first, then fastened them down to the edges. Due to their mix-matched sizes, not all of them reached both sides, but this was ok. As long as any hole wasn't big enough to fall through, I figured it would be fine.

See also: Our adventures hitchhiking through Ireland on (less than) a shoestring...

I should mention now that due to it being 30 degrees every day and very humid, this whole process took about 4 days and was heavily punctuated with naps, swims, beers and general tomfoolery. My girlfriend would find me asleep on a towel muttering "raft... mumblemumble... raft, raft raft". It was the perfect distraction from all the peace and quiet that surrounded me.

With the addition of an old oil bottle and a block of foam for buoyancy, I took it out for its maiden voyage, stopping only to briefly drop the whole thing on my foot as I carried it across the rocks to the water. But blood only makes a raft more badass, so onwards I went. Needless to say it looked as glamorous and elegant as the QE2 when it hit the water, only to sink like a fridge full of molten lead as soon as I tried to sit on it.

See also: The Fresh Air Project: Twin brothers who surf and who are passionate about preserving local culture and the environment

The next day at dawn, after chatting to Zua, the guy who pretty much owns the whole beach, I headed off again on the rocks to find the big blocks of foam I was told would be further along and higher up than I had gone before. I think Zua was very impressed with my raft so far, there was something in the way he looked at me and said "it sinks" that made me think he was on my side. With the addition of lots more foam, the raft platform was now about 20cm higher than it was. I took it out on the water and, feeling desperately optimistic, jumped on.

It floats! It floats! I laughed out loud pushed myself up onto my feet, prompting unbalancing the whole thing and flipping it over on top of me. But still, success! I flipped it back and retrieved an extra long bamboo length I had saved to use as a barge pole. It was time to get mobile.

Now, here is where I learned a very interesting lesson: There is a big difference between floating aimlessly on a raft and deliberately trying to move said raft in a specific direction. A BIG difference. Watching me from the shore trying to move this thing would be like watching a five year old push a shopping trolley through a wading pool full of jelly. I gave it a good shot, but I soon came to the conclusion that my creation was a Floater, not a Mover.

Exhausted and finally satisfied, I dragged the Floater up to the high tide mark and rejoined my girlfriend on the sand.

I could finally relax.

The next morning it was gone.

What did you think of Dave's raft? Have you ever gotten bored and built something awesome yourself? Let us know in the comments below...(Please note: this is not a comprehensive guide to raft building and should not be treated as such).