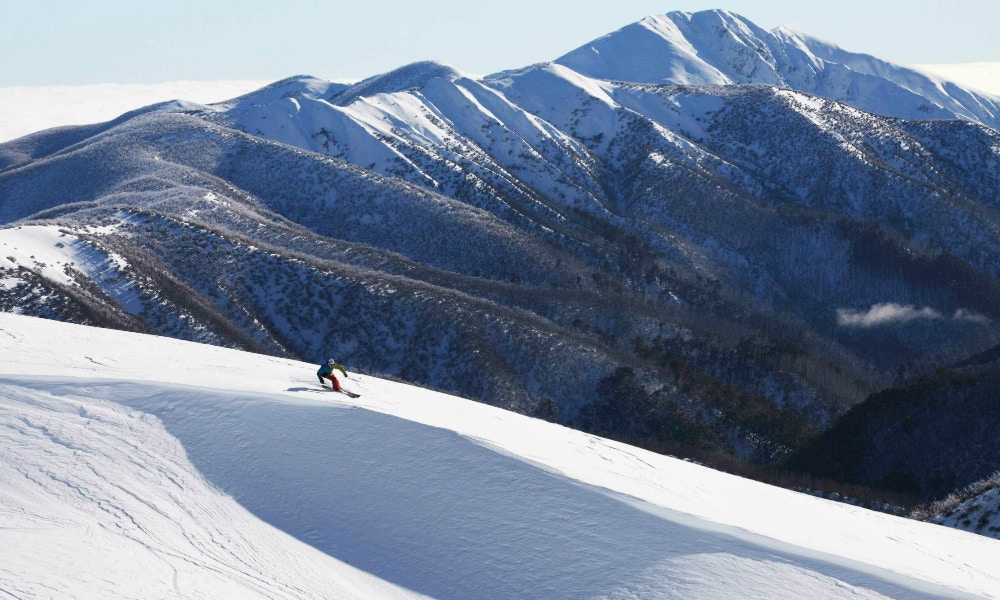 Agreements are made in pubs all the time, not all of them sensible, many of them completely and utterly unrealistic…

“We should start a band…”

“We should definitely start a band!”

“Oh man, do you play anything?”

“We should definitely buy a bar…”

Kurt Luttin doesn’t remember the exact words of the original conversation (after all it was 45 odd years ago), but he does remember that it happened at the pub after a regular squash game played with his mates from the BHP Melbourne Research Laboratory. One of the guys mentioned that there were lots available up at Mt. Hotham, and whether theirs was a decision made after a couple of pints or not, what’s important is that they said they would build a ski lodge, and did.

See also: Dave Hynes got bored on his tropical holiday and built a raft, just like Tom Hanks'...

Kurt left Basle, Switzerland in 1969 and travelled to Australia under the Assisted Passage Migration Scheme. The Australian Government developed the scheme after World War II as part of the “Populate or Perish” policy. Australia’s industries were booming – in particular the mining industries – and the government sought to bring enough workers into the country to keep up with demand.

“With the job I had and the friendships I had built…and a ski lodge, I started to realise I didn’t really have to be in Switzerland to ski.”

It must have been quite surprising for Kurt to find out (like it is to most people who move here from abroad) that Victoria had some pretty decent runs of its own. Skiing at Hotham is of course very different to skiing in Switzerland — to put it in Kurt’s own words “…it’s challenging.”

“We don’t get the 25km ski runs we get in Switzerland, but we have probably more black runs here at Hotham than you can drum together in Switzerland. We’ve got plenty of trees and rocks, and…a little bit of snow in between.

“I’ve seen a lot of change in the 45 years. We used to judge the winter season by driving up to Mt. Hotham and looking at the snow walls left and right of the street. Well these days, those snow walls don’t exist anymore. There are old photos where ski lifts had to be dug through the snow to get up to the top. These days we are lucky that we have grooming equipment, snow making, et cetera. The snow making uses water – recycled water – from the sewerage plant. It provides us with at least a season of, if not natural snow, man-made snow. As you get older, you don’t mind if it’s only 900m down the slope.”

Austen Alpine Club has certainly changed over that time too. The original plan was to create a steel A-frame structure, but the team of researchers quickly realised where their strengths lay (not welding), and opted for a classic wooden design. Most of the main sections of the lodge were prefabricated back in Melbourne and transported up to the mountain. With 34 members back in the 70’s – all of whom had some relevant specialist knowledge – it’s no surprise that it only took them four years to complete the project working in their spare time. Those were their “bachelor days” Kurt said, so they had enough time on their hands to put hammer to nail.

It’s an ongoing commitment, one that sees Kurt returning to the mountain not just to enjoy the fantastic skiing on offer, but to make sure that things are up to scratch. Kurt is the club’s building supervisor and holds regular working parties up at the lodge; events that are compulsory for members of the club. But it’s not seen as a chore: the members look forward to these times to get together and work on the club that they built together all those years ago.

And their work isn’t just for their own benefit anymore. This year, for the first time they have opened their doors to non-members who want to experience staying on the mountain. The club is non-profit, any money made from their guests goes towards the upkeep of the lodge in an attempt to improve upon the current experience.

See also: Our adventures in the Tiger Leaping Gorge, China

The snowboarders have arrived

When we asked how the mountain has changed since he first visited the slopes, Kurt mentioned the change in trends. Hotham was once an incredibly popular cross-country skiing destination.

Kurt is a downhill skier. He later reflected on the days when they would finish with one final run down ‘Australia Drift’. There was no lift to take you back to the lodge so they would hike back, taking about 45 minutes to get to the pub for beer and schnapps.

The mountains are not always the first destination you consider when planning a trip away in summer. But the Victorian High Country erupts with life when the melt begins. Native birdlife and wildlife start to appear again, and with the complete lack of cityscape noise, you can really hear it.

Hotham is a destination growing in popularity with all manner of outdoor adventurers; it is no longer only the realm of the skiers and snowboarders. And Kurt welcomes them with open arms.

“People have got their mind on the beach and they don’t realise how beautiful, how relaxing it is up the mountain. Especially considering the ski lodge provides almost everything you need…”

Hotham sees plenty of hikers, and cyclists grace its snow barren slopes in summer. There is a growing industry for tour companies offering mountain bikers the opportunity to ride downhill without the hassle of the climb back to the top.

But for now, there is still plenty of snow up there. Kurt turns 70 soon, and he’s looking forward to skiing for free as of next year. We hope to see him up the slopes as the ski season gets into full swing: he’ll soon be passing by us as we wait in line for our lift passes, and no doubt flying by us on the way down as well.

To find out more, type 'Ski Austen' into your search engine!