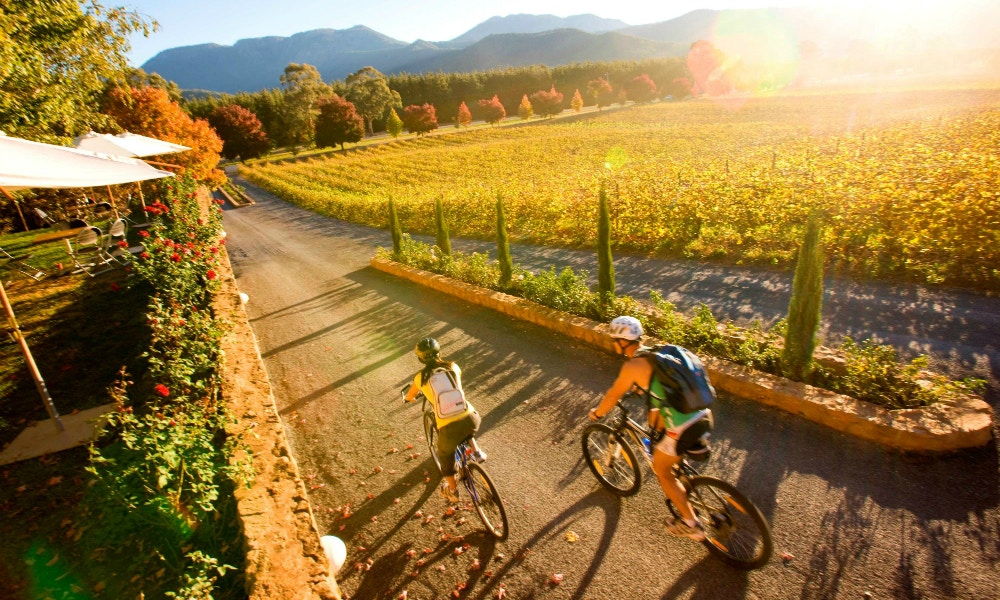 After a full morning’s ride, what better thing to do than hit a local winery for some tasting, kick back with a grazing platter, and then return to your accommodation with a great bottle of something to share over dinner? Sounded like the perfect holiday to us, and we were keen to give it a nudge….

Feathertop Winery is less than 10km from Bright – just a few clicks from Porepunkah near the base of Mt Buffalo on one side, and Mt Feathertop on the other. The view knocks it out of the ballpark, especially in Autumn (when we visited) as the vines turn canary yellow, the nearby Liquid Amber leaves go scarlet red, and there’s that golden tone in the light that makes everything look pretty lush.

Kel Boynton opened the winery in 1989, which apparently makes it the oldest Alpine winery in Victoria. We got the impression chatting from his fellow wine maker, Nick Toy, that this is a winery that very much respects its environment; its terroir. Kel and Nick work to create wines with minimal outside intervention, resulting in 21 different varieties across whites, reds, proseccos, sparklings and dessert wines.

[More of a beer drinker? Start your tour of the regions craft beers at Bright Brewery and Sweetwater

The winery itself has undergone a somewhat recent renovation, which has played a big part in making this such a pleasurable place to visit. Head into the tasting room for a chat to some of the knowledgeable staff, take your favourite glass out onto the nearby vine-covered veranda and then just soak up being in such a stunning location.

The winery’s restaurant is a quiet achiever – they don’t beat their chest very loudly here, but they’d have every reason to. Wherever possible the kitchen draws on the incredible produce that surrounds them – from Milawa Cheese Factory and Mt Buffalo Olives, to Mt Beauty Beef and Myrtleford Butter Factory; whatever the season Feathertop’s chefs have plenty of produce to keep them inspired. I’d definitely recommend heading there with enough time for more than just a drink – order a meal and enjoy it al fresco.

The winery makes it too easy to stop – they’re literally on the Murray to Mountains Rail Trail so you can turn off, park the bike up on racks provided, and head in. You might want some panniers on the bike for the way out, though…!

When we caught up with Nick and the team they were planning a wedding later that evening – it was all happening.

Pour yourself a pinot and hear what Nick had to say about this incredible region, Feathertop’s wine, and why you won’t want to miss coming here when you’re next in the North-east.

Thank you to the winery and Jason Robins for some of these great pix!