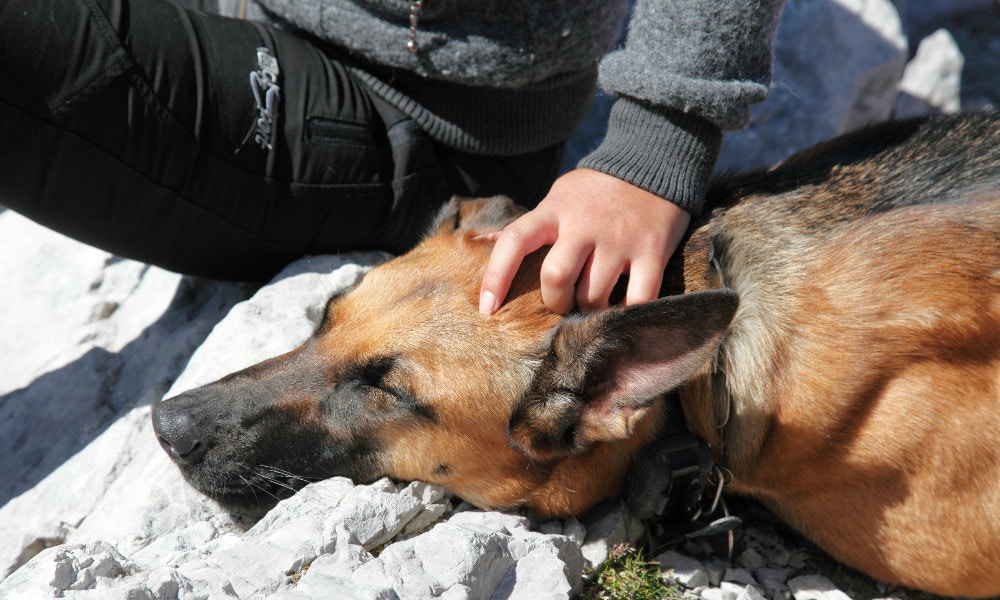 Down Under we’re familiar with working dogs; Kelpies and Border Collies on the farms, Beagles at Customs, Labradors who assist vision impaired, and German Shepherd police canines. But we don’t have legions of four-legged friends assigned as full-time official mountain rescue dogs.

That’s not the case over in Austria, where some 200 canines report into duty as avalanche and rescue dogs. Bora the seven-year old Dutch Shepherd Shorthair Herder is one of 25 such rescue dogs working in the West Austrian region of Vorarlberg, which comprises notable mountain ranges including the Silvretta, the Rätikon, the Verwalland the Arlberg.

Bora works with her master, Bertram, the Technical Chief responsible for all facets of safety within the alpine areas of the region. In summer Bora will assist Bertram and his team to search for missing hikers, and in winter she will respond to avalanches by way of helping to retrieve missing persons. Some canine members of the Austrian Mountain Rescue have also been known to assist in post-earthquake rescue missions around the world.

Having personally met Bora, I can confirm she’s every bit as intelligent, obedient and agile as she is beautiful. I couldn’t resist the opportunity to catch up with Bertram and find out more about her and her entourage of very special working dogs.

Bertram how often do you train with Bora?

Mountain rescue dogs require at least three years of intensive training before they are prepared to step up to the task of their work. Bora is well past that phase but we still train every week. In winter we train eight hours a day for one entire week. In the cold season for example we will dig big holes in the snow and put people inside them, before closing them up again (of course ensuring they can still breathe and are safe!). The dogs then have to find where we’ve hidden the people.

In summer we will head up the mountains or into the forests and again we will hide people in certain areas for the dogs to locate.

Are there any special features inherent in all mountain rescue dogs?

It is imperative that the dogs remain fit all year round, that is a given. They also must be highly obedient. They can’t be too heavy, especially in winter when they are required to push their way through soft snow; the more weight you have to push, the harder of course this becomes. Last but certainly not least, the dogs must be friendly to other people – not just their master – and to other dogs.

So a hard-working dog like Bora must have a pretty healthy appetite?

Bora is fed once a day however, one day a week she is only given water, no solids. This is to simulate the natural environment and situations in which her ancestors would have survived. By fasting one day a week her physicality and psychology remain more true to how she would be in the wild.

Has Bora saved a life?

Bora hasn’t saved a life yet, no. But she’s up to the task!

What’s one of your favourite Bora stories?

One summer we were building a new ski lift and at the time I was the Construction Manager. I visited the site every day and Bora, who was around ten months at the time, would of course come with me. One day I was showing someone something through an open window – I was pointing at it. Bora was five metres or so behind me and interpreted this as a command. So without question all of a sudden she just leapt into the air and sailed through the open window. We were probably 7.5-metres above the ground and she of course fell. She landed on a surface of freshly laid stones and I was sure she would be dead, but in fact she only sustained minor injuries.

See also: Survival expert Bob Cooper explains what you should do if you get lost in the bush while hiking

Aside from her ability to fall fairly safely as a ten-month old, what is so special about Bora?

If you ask the master, every dog is special. However, probably as that window story illustrates, there is a blind trust between Bora and me. Bora is always 100 per cent honest and she will be beside me in every situation, and she will never question it or need reasoning.